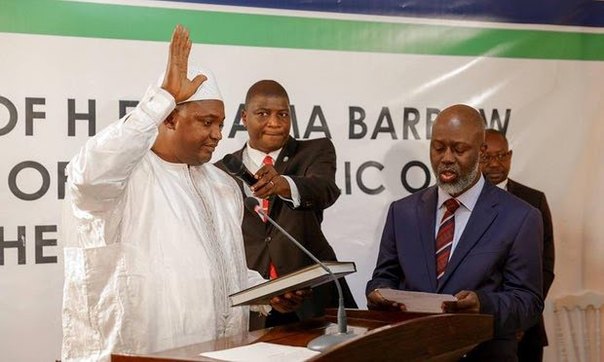 Adamu Barrow, the new Gambian president, taking the oath of office in Gambia's embassy in Senegal.
Yahya Jammeh, Gambia's embattled former president, has promised to step down and go, reports emerging on Friday said.
​     If Jammeh keeps his promise, it will mean that Adamu Barrow, the Gambian new president, sworn into office on Thursday in Gambia's embassy in Senegal, can prepare to return home and assume power.
The case has become a type of 'let's watch and see'. Given that he had first accepted the election result and later reneged. The situation in Gambia has switched against him. He has last lost power and the people has switched allegiance from him to the new president, as the situation and developments in the country have shown.
Celebrations and jubilation on Gambia streets show that Jammeh has become an isolated man. It is why people will believe that there is substance in his promise and that he may finally bow out. But still there is a need to exercise restraint and not jump into conclusion that the dicey political situation in Gambia has ended.
The current political situation in the country is that a new president has been sworn into office outside the country, while Jammeh, who has earlier vowed not to relinquish power remains in the country, but with a promise to step down. It is fair to wait and see him do what he has promised and then congratulate the Gambian people for the victory of good over evil in the country.
NEWS AND FEATURES
News & Features Around The World