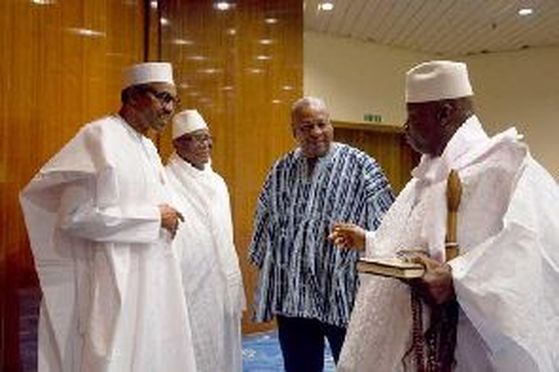 Presdent Muhammed Buhari of Nigeria, Former President Mahama of Ghana, in Gambia to talk Jammeh to reason.
He is robed in white dress, seemingly popular in his country of Gambia, which does not make him a saint, because only saints are known to appear in white.
Since his loss of the election in his country, Yahya Jammeh seems to have chosen to tread on a path, which observers are describing as satanic and no one is certain of its end.
From the development by other West African leaders to persuade Jammeh to no avail for him to abandon the path to doom that he has chosen against relinquishing power, and allow the election winner, Adamu Barrow, to be sworn into office, Gambians are reportedly trooping out of the country.
The Gambians are not heading of the country en-masse for picnic. They are afraid of the disaster that the loggerheads between Jammeh and Barrow on one hand may lead to and between Jammeh and his neighboring West African leaders, who have vowed to use military force to show Jammeh the way out, if he refuses to listen to reason.
But Jammeh appears to have become deaf to reason. He has told the trio of Muhammad Buhari of Nigeria, former President Mahama of Ghana and Sirleaf of Liberia that he is not ready to relinquish power, until the Gambian Supreme Court decides his case of election irregularities that has made him to lose the election.
The events in Gambia is not new compared to histories in Liberia and Sierra Leone, two West African countries that have experienced wars over political differences and leadership tussles. the view of curious observers is that it is either Jammeh belongs to a cult and that he has an undertaking, which will lead to either going into a eternal hole or go down forever and never to be heard of again.
The problem with this type of undertaking, people who know how cults operate say that members who has such underatkings hardly go alone. They are said to be like kings, who has to cause havoc to make many people die to go along with them in their journey into the hole.
People are saying that if not that Jammeh has been slated for purposes ask that how can he accept election defeat, congratulate the winner and hailed worldwide for having been born again, being known for his anti human rights instance, to later say there are irregularities in the election and he would not allow the winner assume office. He has practically declared the winner's election as illegitimate.
The dark cloud is gathered over Gambia. No one is certain what type of birth the pregnant sky in the country will give. People are saying that Jammeh can still save the situation and save Gambia from unnecessary bloodshed. As leaders in neighboring countries plan to visit and resume talks with him last week, he calls to cancel their timetable and replaced it with his own timetable.
When the leaders eventually arrived Gambia, he told them he had no plan to go to anywhere, but to await the Supreme Court's decision in May, four months after Barrow would have assumed office.
NEWS AND FEATURES
News & Features Around The World