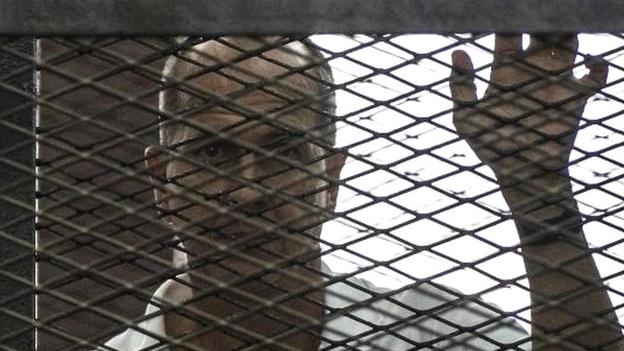 Greste behind bars before his release (Courtesy: BBC)
Peter Greste, an Australian journalist, jailed alongside two Al-Jazeera journalists in Egypt for alleged bias reporting, has been released by the Egyptian authorities.
According to a report by the BBC, Greste has been deported from Egypt to Australia. The report said that the Egyptian authorities are silent on the fate of two Al-Jazeera journalists jailed alongside Greste for same offense.
Al-Jazeera in a tweet welcomed Greste's release and requested for Messrs Fahmy and Baher's release.
An Egyptian official is reported as having said in a report by Agence France-Presse that there is a presidential decision to deport Greste to Australia.
Observers view a possibility of Greste completing his jail term in Australia or be tried again in Australia as a ruse. They say Greste's journey to Australia is freedom, because Australia does not constitute itself to unnecessary constraint against media freedom, unlike Egypt that is seen as having travel from away reason with the coming of President Abdel Fattah el-Sisi. The jailing of the three journalists was not unconnected with a clampdown on freedom that paved the way for SIsi's emergence.
Jailing three people for the same offense and releasing one of them for an undisclosed reason is seen by observers as a manifestation of the regime in Egypt to punish Al-Jazeera for reporting the governments described as bias and in favored Morsi's cause. Many people are saying that authorities in Egypt has no reason for still holding the two Al-Jazeera journalists after Greste's release.
"Continue holding of the two Al-Jazeera journalists is a proof that Egyptian leaders are still clouded in seeking vendetta for journalists' reporting of truth, because it does not favor Sisi," a guy said when interviewed by Global Pentorch.
The three journalists had said from the beginning following their arrest that hey were merely doing the job, an ht they had no connection whatsoever with the Muslim Brothehood. Despite their plea, Greste and Fahmy were sentenced into seven years jail, and Baher's into 10 years.
NEWS AND FEATURES
News & Features Around The World