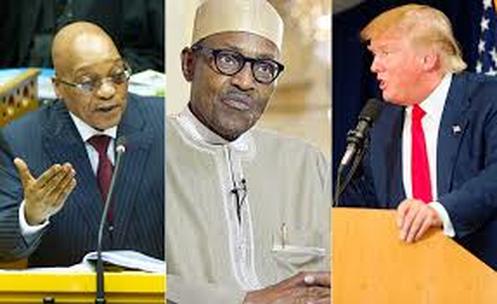 Jacob Zuma of South Africa, Muhammad Buhari of Nigeria and Donald Trump of the United States Courtesy: AllAfrica)
"Growing Up Amid Uncertainties" is the title of my 2010 book. It is the story of my struggle for education as an indigent in Nigeria, how I almost lost the struggle there, and how I have won the battle after my arrival in the United States.
The discourse here is not so much about myself and my struggle for education and the eventual victory, but about human struggle in general, uncertainties that surround the outcome of many struggles, and how some are lucky to win and others are unfortunate to lose.
Many of us believe that winning and losing have something to do with destiny, your background - either wealthy or poor. Along the line, some have come to the realization that hard work and a little luck, can determine how far one can go in life to realize life's objective.
When political events in certain countries are studied, the question about destiny. ill luck and luck and uncertainties will come into discussion. Jacob Zuma won the presidential election in South Africa, but South Africans no longer want him . If elections are held in that country today, many observers say that Zuma will lose.
Observers believe that Zuma's unpopularity has nothing to do with destiny, but his own doing for reasons best known about developments in the country. Zuma doesn't believe he has lost any relevance in South Africa, but that whoever he and his party support, will win the next election.
In the U.S., Donald Trump fought like a Hercules and won the presidential election against a popular candidate, who had three million votes than him. The mammoth of opposition to Trump in his own party, before he got into the general elections and victory still located him, may never be forgotten in the annals of human history, along with the loss of Hillary Clinton, whom many people thought was the next president of the U.S.
Both Trump and Clinton went through great uncertainties, but one came out victorious and the other a loser. Can Trump's victory against mammoth oppositions - in and outside his party - be tied to destiny and luck, and Clinton's loss to destiny and ill luck? Trump has marked the first 100 days in office and has embarked on his first foreign trip as president, despite continued mammoth opposition from the liberal media and the resolve to undermine his administration and get him out of the office at whatever the cost. But the guy is still soldering on!
As I write, some Democrats and their liberal media counterparts are already singing Hossanah, over developments they say will lead to impeachment. But curious observers are saying this guy has been growing amid uncertainties greater than any uncertainties ever in any political history. He has scored very high in his first foreign trip that his political enemies cannot hide the facts, and still they awaiting his impeachment.
Let us take a ride to Nigeria. President Muhammad Buhari has returned to London for continued medical attention, and Vice president Yemi Osibajo has started acting as president for the second time. Many Nigerians are worried about turn of affairs in the country. They are scared of getting caught in a web of a bad experience.
Many Nigerians relate easily to their experience under President Shehu Yar 'Dua and they are praying against another of such experience. Nigerians don't want to lose Buhari and the fight against corruption. Many have already started asking, whether this experience has anything to do with destiny, luck or ill luck, that each time a new president gives hope of better tomorrow, sickness or death comes to steal away the hope.
People can relate to yesterday and today, but only God knows what is tomorrow. We live like the blind going through utter darkness into tomorrow. Forecasters also know that predicting about tomorrow is not easy, and that as humans predictions are about guessing and can never be like certainty.
Click to set custom HTML
HTML Comment Box is loading comments...
NEWS AND FEATURES
News & Features Around The World