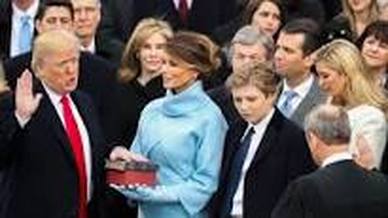 President Donald John Trump, United States 45th president at swearing in on Friday
It is natural that every time a woman is pregnant, she gives birth to a new child. The same is applicable to democratic countries that every time a new leader is elected, he or she comes with a gospel of newness or rebirth.
​     No new leader has been elected without a promise of renewal. But whether the promise is fulfilled or not in the course of governance, is another dimension.
In most cases, it has become manifest that these promises are hardly fulfilled, and this gives impetus for the emergence of a new leader, with another promise of newness or renewal.
​   The politicians' unfulfillment of promises and the hunger for renewal by the people have become  needs politicians for attention and competition. Every four years, America gets renewal promises from a sitting leader seeking reelection or a new leader seeking his own her time in office. It is a ritual, as President Donald John Trump notes in his inaugural speech on Friday at his swearing  as the country's 45th president.
The new president has not minced words that he is here to give the country a new birth and that he is urging Americans to welcome a Happy New America. The speech is especially tailored to confirm the loss of faith in politicians by voters, who have been accusing politicians of forgetting their promises to voters as soon as they arrive in Washington and they begin to serve their own personal interests., according to words making their rounds among voters.
It is why many people see the election of a non-politician as a rebuke of traditional politicians. Now he has said that it is time that the people is restored back to the people as contained in the constitution. Which means that the people are the masters, who have chosen the politicians as servants to represent them and not the way politicians have assumed that they are the masters and indirectly turn the people into servants.
The people in major cities may not feel the pain of politicians' unfaithfulness, unlike people in the rust region. The cities voted for the maintenance of the status quo, but the people in the rust states, which comprise the battleground states, voted for a change. People in the rust region are happy for a new America, while people in the cities are angry that they have failed to achieve the maintenance of the status quo.
Part of the new America is that power will go back to the people, that the people will no longer be forgotten or ignored, that the attention will henceforth be on the welfare of America and American people instead of taking care of other countries, while America and American people are neglected, that the wealth of the middle class will be restored, that shuttered factories will receive attention for the good of American workers, that every decision on trade, taxes, immigration, foreign affairs will benefit Americans.
He said it is time to get people off welfare and get them to work. He intend to reinforce old alliances , make new ones and unite civilized world against radical Islamic terrorism.He says that this is not empty talk.
Many people believe him and many people also doubt him, based on past experience of talks without fulfilment. People who don't believe have been on protests and demonstrations since his election, and the vandalization in Washington on Friday has been condemned by ordinary people as uncalled for. People approve peaceful protests and demonstrations against violence and vandalization.
​   They say the inauguration confirms the legitimacy of the new president's election based on the country's constitution and that there is a need to wait and see, if the new president will make a difference and will do all that he has talked. Of course, many workers say that they are waiting for a change in the tax code toward more money in their pockets. Many people think there is nothing wrong with American centered policies, as long as the promises are fulfilled.
NEWS AND FEATURES
News & Features Around The World