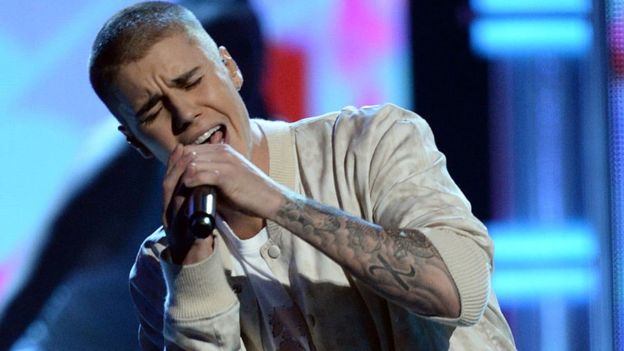 Justin Bieber Courtesy: GettyImages)
Banned from China for bad attitude, and suddenly cancelled the remaining of his world tour, for no reason other than that he felt exhausted!
When Julius Shakespeare wrote that if music be the food of love, play on and give enough that surfeits, it did not mean music should be food for bad attitude..
The authorities in China seemed to have got it, when they decidedly barred Justin Bieber from performance in that country. China wants music for love and not any other reason.
China's decision banning Bieber aligns with Shakespeare's description of music as food for love and not bad attitude. Of course, China has not hidden the reason for its ban on Bieber as being for bad attitude.       The first reaction of majority observers on hearing about China's decision on Bieber was a question about whether Bieber has not come of age, because in the past his seeming carelessness about his attitude was tagged to his youthful age. And before the discussion on China's Bieber ban would be concluded, another news emerged about Bieber's cancellation of his world tour.
The first inkling the news of the cancellation gave was that Bieber may have cancelled his world tour as a reaction or protest to China's ban on him. But when you read the news of his cancellation of his tour, no reason was given other than that Bieber wanted some rest!
Simultaneously, Bieber wanted his fans to get refund for their tickets at the point of purchase. Although, he apologized for cancelling his tour for unforeseen circumstances, but his manager, Scooter Braun, in his statement on instagram messed up the whatever the unforeseen reason behind Bieber's decision to pull out from the remaining of his world tour. "To Justin, who gave it his all night after night, thank you. And to those that won't be able to see it... on behalf of myself, Justin, and the team, we are sorry. That was never our intent. But a man's soul and well being I truly care about came first and we must all respect and honour that. Justin will be back and I know he looks forward to performing for you and with you all again. One chapter ends and another begins."
Bieber's statement on his cancellation of his tour said he loves his fans and that he does not hate them. The issue here is not about love and hate. It is about fulfillment of a contract and breaking of a contract. The contract between Bieber and his fans is that they have purchased tickets for his show and not for cancellation of any show without tangible reason backed by authority, like when the british singer, Adele, cancelled the remaining two of her tours due to medical advice after damaging her vocal cord.
Adele did what was legally and morally acceptable. She got a medical advice to back up her reason for cancelling the remaining of her tour. She did not just say I have damaged my vocal cord, therefore, I am cancelling the remaining of my tour, the way Bieber has done, because he feels exhausted, he has to cancel his tour, and forcing his fans to go through the agonizing process of getting refund for their tickets at the point of purchase, without considering the time it will take them to request for the refund and the waiting before the refund request will be approved for collection.