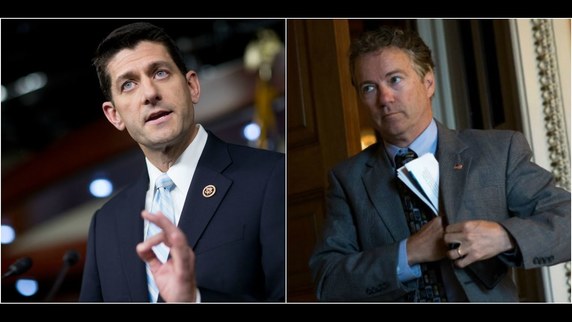 Speaker Paul Ryan, who masterminded the aborted legislation, and Senator Rand Paul, who cried out against packaging the legislation in secrecy and a cry against copying the Democratic Party's act of seven years ago, for packaging ObamaCare with no Republican party members' knowledge of the content.
"Our greatest glory is not in never falling, but in rising every time we fall," - Confucius.
One major lesson that has been learned from the result of the aborted health care legislation is that members of the minority political group and the Liberal media have characterised the outcome as a defeat for President Donald Trump and Speaker Paul Ryan.
There are some among the commentators, who have said that it may mean the end of Trump's presidency, and that Trump may be consumed by the civil war within the Republican Party.
They have erroneously termed the dissent in the Republican Party to civil war! A statement that has made observers to ask whether America is no longer a democracy and whether the liberal media no longer cherishes dissent as part of the country's democratic culture.
One observer interviewed by this reporter said that all that the Liberal media is doing with the outcome of the aborted health care legislation is propaganda against Trump's presidency and the Republican Party. He said that there is no war in the Republican Party and that what has happened with the health care legislation in term of dissent in the Republican Party, is in the best interest of the country and the ordinary people.
According to him, if the Democratic Party has the type of dissent being witnessed in the Republican Party, the ObamaCare would not have been put together in secrecy with massive content that no one knows all that are inside and the cause of its implosion and the need for remedy. He said that the voice of Senator Rand Paul was loud against his party attempting to secretly package the health care legislation without the input of all party stakeholders.
At the end of the packaging, argument began over the fact that if the law passes, about 24 million Americans may lose health care coverage. Some commentators said that that may have been exaggerated and that the legislation should pass and then make corrections later! Of course, there is the disagreement about the need to throw away the ObamaCare and have a completely new legislation.
President Trump, whom the naysayers don't want to see succeed has said that two provisions in the ObamaCare - allowing people with pre-existing medical cases access to health care and children to be allowed to enjoy their parents health care until they are 26 years old, be allowed in the new law, as continuation of parts of Obamacare. He was not part of the 7 years demand for the repeal of ObamaCare. But as an astute campaigner, he saw the Obamacare argument as capable of a strong argument against the Democratic Party and the reason voters should support him against his opponent. Just like President Bill Clinton did in Ohio, when he campaigned against ObamaCare's shortcomings and his wife will do the repairs, if voted into office.
But unlike Trump, some Republican Party law makers don't want any provision in the ObamaCare be carried over into the new  legislation, no matter how salutary and helpful to the ordinary people. Whether these members belong to the Freedom Caucus or Tuesday Group of the matter, what they need to be told is that they don't have to be like the Democratic Party law makers and the Liberal media, which election loss have turned into Trump's utter enemies and they cannot see any reason, no matter how salutary, even if it will advance the cause of the ordinary people will make them to adjust their mindset.
The aborted legislation, the media propaganda after the experience in the Congress, the fact that not a single Democratic Party law maker was ready to vote for the new legislation, have made the Republican Party realize the evil they have visited on their own party, by allowing dissent.
Yet, nothing is wrong with dissent based on lessons being learned from the development. It is clear, based on the words of everyone that ObamaCare is sick and needs remedies. If the party that controls the Congress decides against surgical operations being demanded by the Democratic Party to cure ObamaCare, the party has to work to give Americans a new health care legislation as demanded by voters who voted them into office, to save the ordinary people from the ObamaCare's manifest sickness.
One does need to be a soothsayer to be able to know see the Republican Party and President Trump's  as capable of rising from whatever fall that the aborted health care legislation experience represents.
NEWS AND FEATURES
News & Features Around The World