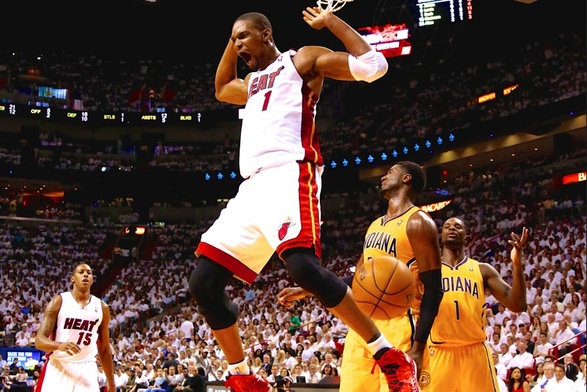 Joy of winning and the pain of defeat (Courtesy: Brian Chen, Getty Images)
The Heat eventually wrapped up the Eastern Conference finals by beating the Pacers 117-92  on Friday in Miami, and won with 29 points lead.
"We are competing against Jordan and Bulls of our era, and you have to tip your hats to them," Pacers's coach Frank Vogel said, with reference to James LeBron as 'MJ' of the era.
The Heat sets the pace of the game from the first quarter after wiping off Pacers' early seven points lead. Heat seemed to have decided not to give the Pacers a chance again. The quarter ended 24-13.
By the time the game entered the second quarter, the Heat led by a margin of 18 points and widened the margin to 26 points into the third quarter.
The Heat ended the third quarter with 32 points lead over the Pacers, and maintained the margin into the fourth quarter with the Pacers playing to catch up.
It was not a pleasant night for the Pacers at all with its effort to catch up yielding no result four minutes to the game' end, and the Heat leading with 29 points. The game ended in favor of the Heat with 25 points lead. It is the Heat's 4th straight finals in routs.
Widget is loading comments...
NEWS AND FEATURES
News & Features Around The World