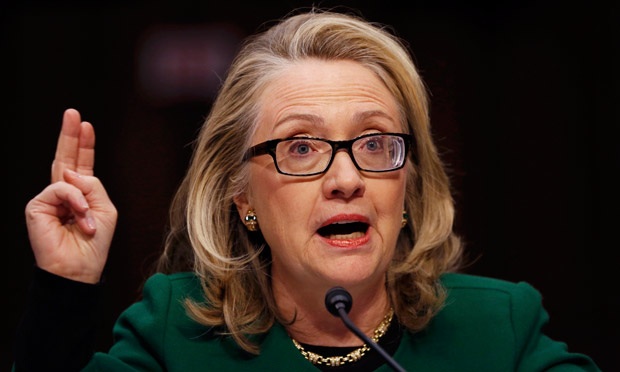 Hillary Clinton (Courtesy(www.guardian.com)
Senator Hillary Clinton is at it again, with a New York Post' report that says she describes President Barack Obama's Iraq's policy as stupid, and as the cause of the America's current Iraq problem. It has become an act known with Hillary that she runs from responsibility when things go wrong.
What is in Obama's Iraq's policy that warrants being called stupid? Of course, calling it stupid is keeping a distance from it for the sake of seeking office. If being an old fella in the White House was the cause of Hillary's loss of the primary election to almost an unknown Obama in 2008, skedaddle may cause Hillary another loss in the next Democratic Party's primary or general election.
Hillary cannot run away from Obama's no war policy. She was part of the administration until recently. She knew Obama did not vote for Iraq's invasion and one of the reason Democrats elected Obama and not her who voted for Iraq' invasion. When Obama invited her to join his administration, she knew the differences between herself and Obama, yet she agreed to go and serve in his administration. Was she aware of Obama's Iraq policy before she jumped into the administration's boat? Was she aware that it part Obama's campaign promise to Americans that he would pull American forces out of Iraq if elected president? What then is stupid in fulfilling an election promise?
Hillary has only one vote compared to the throng of American voters who have approved Obama's pulling of entire American forces from Iraq. How would a president be blamed for internal problem of Iraq as a country? When did Iraq become America's outpost that America would be required to keep a force there in case of any occurrence? There is a good comparison for Hillary's act in Stephen Crane's "The Red Badge of Courage", and only that Hillary's act depicts lack of courage. First, it was Benghazi. She dodged before she later came out and said she should be held responsible. The office of the Secretary of State had no business with whatever may have happened to an ambassador whose cry for help was disregarded. But then, Obama gave her a cover from Republicans who called for her to be investigated.
Now, she is on the run from a policy she has been a part. When discussion arises over invasion of Iraq, Hillary would say she has voted for it before she gets to know the negative aspect of the invasion. Hillary would not agree what she had voted for was a wrong policy. It is Hillary's policy of no commitment like the mother of the young soldier in Crane's book, who told her son that joining the army was not a right thing for him. But when the son went and joined in spite of his mother's opposition, the mother did not say to hell with it. But she helped the son put together his luggage for eventual departure from home and began to tell him how to behave to survive the ordeal of war. Apparently,when the son got to the battle front, he began to think life at home running errands was better for him than being in front of fire and began to think he may run.
If the mother had insisted on her opposition and did not help put together his luggage, probably the boy may have reconsidered his position and not go to join the army. If Hillary had told Obama that she was not in support of pulling entire American forces from Iraq as he had promised the electorate, and therefore she could not serve in his administration, Obama could have change or tinker with the wholesale idea of pulling an entire force. But Hillary did not see anything wrong serving in an administration she did not agree with in policy. And yet, herself and husband ensured the man she had called his policy stupid was return for a second term in office.
Hillary's inconsistency is confusing. Are these inconsistencies for the sake of seeking the office of the president in 2016? Hillary needs to know that it is better to be consistent and lose a game than being an inconsistent winner.