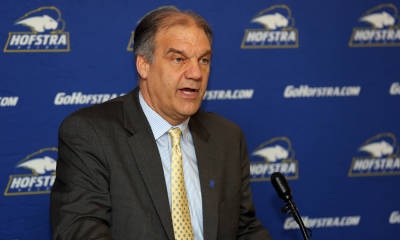 “We made mistakes defensively. There were times we scored that we did not get back. We made a lot of mistakes in the defense,” Joe Mihalich, Pride’s coach said at the post game’s conference.

The Blue Hens resumed the second half with ferocious attack and defensive play. Saddler’s mesmerizing dribbles overwhelmed the Pride’s formation. But the Pride refused to yield. Both teams competed keenly for the ball. The Blue Hens buffered its defense and attack with Harris Barnett. He was all over the pitch like a butterfly against any Pride’s player with the ball. A ding-dong affair ensued. The Pride sought to hold to its lead, and the Blue Hens sought to scuttle Pride’s lead.

More fouls – 10 by Pride and 8 by the Blue Hens - resulted from pressure. Resultant free throws enhanced Blue Hens’ effort at leveling the score. The chance came when Anderson scored 2 free throws at 08:13 and the score became 62-62.

The arena glowed and game enlivened. Both teams struggled to surpass each other. The Blue Hens exhibited renewed strength in a grit encounter against Pride’s Dion Nesmith, Jordan Allen and Jamall Robinson. Anderson was brought down with the ball by Jordan and ensued free throw gave Blue Hens an edge, before Carl Baptiste sealed Pride’s fate.

“It is an irony,” said one reporter to his colleague. “The Pride always wins in the first half, but loses in the second.”