Holder out, Lynch in
By Abi Giwa 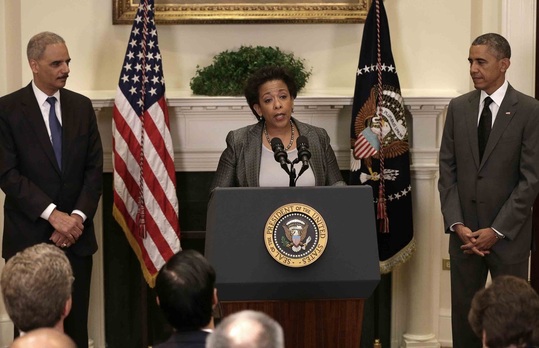 President Barack Obama has appointed Loretta Lynch, a federal prosecutor in Brooklyn to replace Eric H. Holder Jr., who has resigned as attorney general. The president's choice of Lynch as United States next top law enforcement officer will be announced at a meeting  with the new attorney general and the outgoing attorney general on Saturday, a source has revealed.
Lynch, 55 years old African American, is the first woman from her demography,  to be appointed attorney general. She has been described as independent, an outsider and a new face in the administration. She was born in Greensboro,N.C., and had her law degrees from Harvard in 1984.
Lynch had served as associate at Carhill Gordon & Reindel before her appointment as federal prosecutor. She later became assistant United States attorney in the Eastern District of New York in 1998. She had also been a partner at Hogan & Hartson.
NEWS AND FEATURES
News & Features Around The World