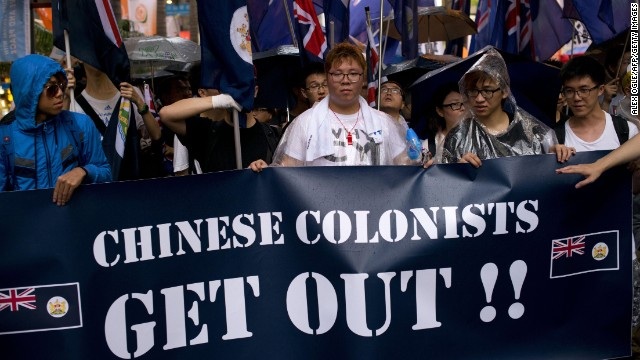 Hong Kong's pro-democracy protesters on Friday called off the talk they had started with government, following attack on them  by people opposed to occupation of streets.
Protesters suspended talk with government representatives and blamed police for failure to shield them from unwarranted attack.
Reports from Hong Kond said that the police could not contain the opposing camps. Police are reported to have been overpowered by riotious crowd who are against students who are occupiers.
Police manageably arrested two offenders and went away with dozens of occupants' opponents. A large number of people were consequently injured in the melee between occupants and their attackers in a protest that had been peaceful from Sunday when it began, and until Friday when opposition emerged. Students who are occupiers suspect that the opposing crowd may have been sponsored from Beinjing. Cy Leung has appealed to the crowd to be peaceful, and adds that it is proper for the crowd to disperse as he does not want them harmed and makes a special appeal for young students in the crowd - some of them in school uniforms - not to be hurt.
Aside from the sudden physical opposition against the protest that has entered its 7th day, there are others who are opposed to continuing occupation, because they say it is hurting the economy.