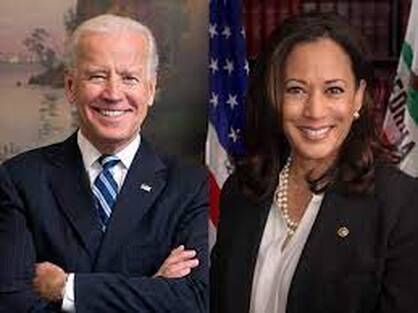 President Joseph Biden and Vice President Kamala Harris. Photo (Courtesy: The University of Manchester)
Are you planning to cross the border or help illegal immigrants to cross the border from Canada to the United States, disregarding the weather condition? It is dangerous, deadly, and criminal. According to news reports, the advisory emerged after four people - two adults, a teen, and an infant died in icy weather on the Canadian- American border.             "I have a message for anyone who is thinking of crossing the border in Manitoba, either heading south or north; don't do it. It is virtually impassable terrain and deep snowdrifts. And do not listen to anyone who tells you they can safely get you to your destination." Jane MacLatchy, an assistant commissioner of Royal Canadian Mounted Police, RCMP, said.
New twists have surfaced in the immigration imbroglio with information from the fatal illegal crossing between Canada and the U.S. The first is not that only the U.S., Southern border with Mexico is affected by illegal immigration; the Canadian border with the U.S. at Manitoba has joined the fray. The second is that helping anyone cross illegally is also a crime, coming to light with the arraignment of a Florida resident, Steve Shand, for helping illegal crossing between Minnesota and North Dakota in the U.S. near the Canadian border. He drove the vehicle with unlawful immigrants inside.
Cartels in Mexico and elsewhere better listen. Authorities have criminalized your activities. You have field days between Mexico and the U.S. border, helping millions to cross into the U.S. with leaders showing no concern. Developments at the Canadian-U.S. border may influence business at the U.S. and Mexico's border. Possibly, President Joseph Biden and Vice President Kamala Harris may have woken from slumber.
The history of migration from place to place is long. The story began about immigration in Africa that started days before modernism with people seeking better land to farm, fleeing from marauders, or seeking adventure. "The New Immigration," edited by Marcelo M. Suarez,-Orozco, Carola Suarez-Orozco, and Desiree Baolian Qin, presents the pull and push factors behind people's desire to change places of abode. A bad situation in an area leads to a push to get out. And better conditions in other land leads to a pull to go to these places with good conditions.
The recognition of modern states with boundaries and their power to process immigration of people from other places based on needs has made undocumented immigration illegal. However, undocumented immigration has continued despite the existence of modern nation-states. Some countries are rich, and some are extremely poor. Condition in rich countries serves as a pull to those nations.
Immigration has become life and death issue. The world has witnessed endless deaths of people across the Mediterranean to Europe from Africa. The Cartels reigned supreme in Libya after the end of Muammar Gaddafi when the country was without a leader. They care about the money they make from desperate immigrants but are careless of losing human lives. Reports of ships sinking in the Mediterranean have not ended. Recent events on the U.S. and Mexican border recall the Libyan woes.
The latest bizarre story of immigration is happening in the U.S. The current liberal government favors an open border. It has done little to nothing to stop illegal immigration until the latest death of four people in Manitoba. And the arraignment of a Florida resident for encouraging illegal migration.
Comment Box is loading comments...
NEWS AND FEATURES
News & Features Around The World