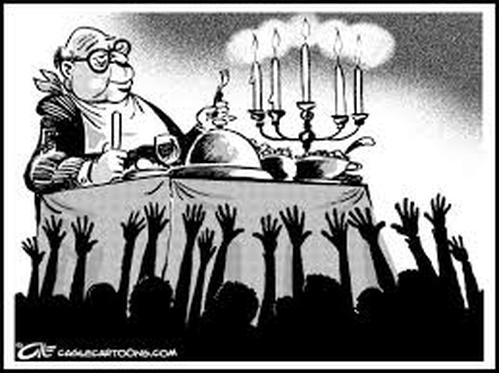 A photo from a story illustrating why there are rich people and poor people (Courtesy: BobbyFinance)
We all want to be rich so that we will have no worry about lacking money for food, clothing and shelter. Some of us have billions or millions and they want to have more, and still competing with people who  barely have. Some of us have enough to make them comfortable and when asked whether they are rich or not, they say are not rich, but that they are comfortable.
It has not just begun to be like this, but it has been so for a long time, from the beginning of creation, if accounts of human evolution from various sources are considered. Aside from the apparent inequality, which the trend has created in human society, it has led to everyone striving to want to get to the top.
Well, you have to belong to the class of those who have for you to be considered as being on the top. And those who are on the top wants to remain on the top, hardly allowing room for others who are below and who want to to get to the top to have a place.
Some people say that for some of the people below to have a place on the top and be allowed by those who are already at the top requires schemings and at times worshiping or licking the asses of those who are already at the top to get there. It is where some people have said that sources of wealth stink. People are ready to do anything to embrace the stench in wealth than live with the stench of poverty.
There are biblical illustrations, which people show about what it entails to become rich. For example, Abraham on two occasions told two kings that his wife was his sister, to avoid them killing him and taking her from him, because she was beautiful. Though, the kings accepted she was his sister and took her briefly before God intervened and restored her back to him. But the connection of having a beautiful sister paved the way for the early wealth that Abraham had. The kings with whom Abraham had encounters certainly must have ways they got their wealth from the sweat of the masses, for them to be stinkingly rich and to determine the fate of a traveller and his wife, if not for God's intervention.
In the case of Jacob and Esau, no one seems to understand why their mother chose to allow Jacob access to the blessing, which ought to have been for Esau. It remains a mystery, why a mother would favor one child against the other. Some people believe that such occurrence still happen up to these days, between parents and their children. Understanding Esau's loss made Isaac lamented that he already gave the blessing to Jacob, but he would bless Esau also, but the blessing could not be compared to the one that Jacob got in term of substance.
To explain the mystery behind why some people are rich and some people are poor, elders in Yorubaland of Nigeria say that some people have heads but they have no hats to place on the head, while there are also people who have hats but they have no heads to place the hats.
People say they are very sincere, when they say that very few people among the rich have the type of Joseph's experience in Egypt, to get to the top and become wealthy, after excruciating ordeals. But what has made the lives of the wealthy and the rich really stink is the desire to reserve their wealth for their children to inherit, careless of others in the society, who desire the same wealth and are excluded, because the already wealthy will not surrender their seats on the society's at the top of the ladder to anyone other than their children.
It is why some people are born poor and they die poor, no matter how hard they work to turn the table against poverty, and while some people are born rich and die rich, even if they don't work at all.
NEWS AND FEATURES
News & Features Around The World