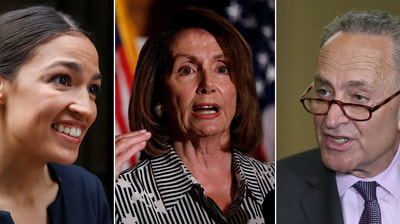 Alexadria Ocasio Cortez, Nancy Pelosi and Charles Schumer
Alexandria Ocasio Cortez, new Democratic Party's House member from New York, reportedly said in her tweet that Jesus Christ was a Refugee. She did not explain the circumstances that made Christ a Refugee.
One news report links Cortez's statement  to how Christ's parents took the baby into Egypt to save him from destruction before he was later returned to his homeland.
However, the report did not clarify why Christ became a Refugee. The report also failed to explain the difference in the reason or make any comparison between people seeking to be Refugee for political reasons and economic reasons, and whether seeking to be Refugee for economic reasons certifies the conditions for Refugee status in the United States.
The clarification was needed in that news report, to show how politicians can use any opportunity to confuse the public and gloss about the truth to gain attention and undeserved acceptance. It happens all the time. Politicians are adept at the doing exactly that.
For example, before Cortez's tweet about Christ, there was a statement by Nancy Pelosi and Charles Charles Schumer, two strong Democratic Party personalities, depicting the political situation in the United States concerning  President Donald Trump's demand for money to build the wall and his insistence on government shutdown as leading to chaos, and the cited the fall in the Dow Jones, the resignation of the defense minister and the decision to pull troops out of Syria, to buffer their position.
The statement attracts a question about where in the U.S. there is chaos. Of course, there is no news about political chaos anywhere in the U.S. other than the imaginary chaos in Pelosi and Schumer's statement, and unless they meant to reference the situation at the border, where two Guatemala children had reportedly died in U.S. custody.
Pelosi and Schumer's statement is a quick reminder that some people already began wrongly pushing the children's death as Trump;s responsibility.  How can it be? What about the children's parents who put the children on a long and arduous journey? What right has anyone to drag a seven and eight-year-old children on such a long and tortuous journey from Guatemala through long and windy journey to Mexico and to Tijuana before arriving at the border, and not be held responsible for inhuman act against children or endangerment of children's lives?
Apparently, realizing that Pelosi is expected to become the Democratic Party's majority leader in the House in a matter of few days, and Schumer is the Democratic Party's minority leader in the senate, and the two are stoutly engaged against Trump over the border wall,  the reason for their statement laced with political half truth locating chaos in the U.S. where there is no chaos, and failed to properly locate the real location, where the chaos exists.
If the parents of the two children had gained necessary traveling visa and decidedly took the kids with them, they would be free of culpability in the endangerment of the children's lives. But they knowingly put the children on a journey they themselves were unsure of its safety.
Fact is that both President Trump and his opponents, who are denying him money for the wall, are both culpable for the shutdown of government. News reports say both sides are holding firm to their positions. Observers expect them as adults to be able to find a common ground and end the circus.
But, please note that there is no chaos inside the U.S, except in California, where news reports said that an illegal immigrant  shot and killed a police officer. The killer is said to be on the run, armed and dangerous. The flash of light in the sky in New York Thursday evening, which observers feared was something from another planet, was reportedly caused by a malfunction in one of Con-Edison's transformers in the Queens borough area.