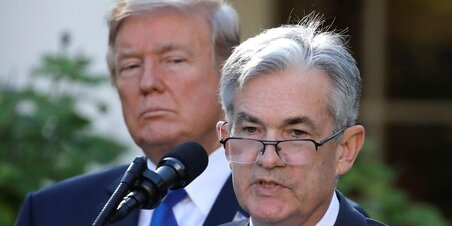 President Donald Trump and Jerome Powell, the feds chairman
The stock unravel on Wednesday with the Down Jones Industrial losing over $300.00, an immediate reaction to the lower of the country's interest rate by the Feds. President Donald Trump reacted angrily against the feds' decision to lower rates, just as many other Americans questioned the reason for Feds' decision amid a manifestly strong economy.
​     The last the Feds cut the interest rate was 2008 during the recession. Wednesday's Feds'  decision came after weeks of information that filtered out that lowering of the interest rate was in the making. Although, not the first time for the stock to unravel in recent time, people follow the news of Wednesday's development with serious concern about the country's economic situation.
However, the stock returns with a renewed gain on Thursday morning with the Dow Jones Industrial at $174.50, effectively displacing the worry caused by Wednesday's stocks' unraveling. 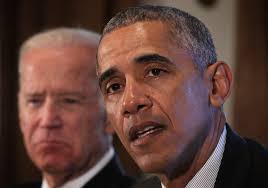 Joseph Biden and President Barack Obama
Between the stock unraveling of Wednesday of the stock and Thursday's renewed momentum, the Democratic Party's presidential candidates' second debate kept Americans glued to their television screens on Wednesday night.
Joseph Biden, former vice president during the Barack Obama administration came  under attack from all other candidates and he seemed to have held up his position attacking back without any cause for animosity. Senator Kamala Harris, California's former attorney general, Senator  Cory Booker, former Newark's mayor, Julian Castro and Mayor Bill de-Blasio of New York , all unloaded against Biden.
It was like de Blasio's survival depends on his ability to take Biden down. The sometimes fierce disagreement between Biden and his traducers from the left of the Democratic Party opens the door for the Centrists among the party's candidates to assault all the candidate's plans for free this and free that for all. Rep. Tulsi Gabbard took upon Harris and virtually removed the ground from her feet and Harris lacking adequate response on her handling of the criminal justice reform in California.
Biden was pushed to the wall on the issue of Barack Obama's policy on immigration and the large number of deportation of undocumented immigrants. He disowned the policy by saying that it was not possible to make his private decision public - meaning he was not in support of such deportation! But observers say that if Biden eventually becomes his party's nominee, he would have a big job explaining to Americans his opposition to deportation undocumented immigrants, especially deportation during the Obama's administration, when he was vice president.
Primarily, the Democratic Party combatants tried to rip into President Donald Trump immigration policy and the handling of the crisis at the southern border, but in their attempt they exposed their own party earlier leadership deportation policy under Obama. Rather than condemn overt illegal immigration through the southern border, they condemn the handling of the crisis that they say has caused separation of children from their parents and how children are treated in the makeshift accommodation provided for them.
The nation's broken immigration policy that has led to the crisis at the border was not tackled. Castro who tired to show some sense got carried away by a sense of America belonging not only to Americans, but to the large number of illegal immigrants as well. He tried to parry a question about whether American should open its borders to illegal immigration or not, and that no country in the world maintains an open border without any form of control against illegal immigration.
Biden at one point corrected his colleagues and told them to remember that a large number of people are on line in other countries waiting to be given visa to travel here. But he changed his position after he was overwhelmed by their overt criticism of his position. The issue of medicare for all is another area that divided the Democrats about how the funding for such a program will be sourced. , given the centrist like Senator Bennet field day about how the Democrats will rip Americans with unwanted tax burden.
Some observers said Biden was winner of the Wednesday night's debate, others said there was  no winner. Many others say there is still no clear manifestation about who will be the party's flag bearer among the contenders.  .
Click to set custom HTML
NEWS AND FEATURES
News & Features Around The World