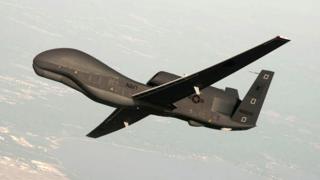 The downed unmanned drone
The crisis between Iran and the United States has moved close to getting blown out of control with news reports that Iran downs a U.S unmanned drone. President Donald Trump has described Iran's act as a big mistake.
​    Iran's response is that the U.S unmanned drone has been downed by Iran's surface to air missile, because of the drone's violation of Iran's air space, and that shooting down the drone means a clear message to America!
But the U.S said in a response that its drone was over the international waters when it was shot down by Iran and described the attack as unprovoked.. The White House is reported to be holding a meeting over the development. Though, reports say the U.S has no intention to engage Iran militarily.
​     However, curious observers view Iran's act as carelessly playing with a Tiger's tail.
In a monitored analysis on the matter, a former Navy officer demanded that the U.S. should show the world that the shot drone was on the international waters as the U.S. had claimed in its response. The officer siad that if the truth is that the drone that costs about $180, 000,000 was on the international waters, there must be adequate response from the U.S. to warn and deter Iran from such a misbehavior.
The former naval officer said that the U.S may not have intent of engaging Iran militarily, but he expects a response nonetheless either destroy the batteries of the equipment used by Iran or an appropriate target that will teach Iran a lesson. Meanwhile, Iran was reported to have directed a shot that hit a place in Saudi Arabia, a U.S. ally and Iran's enemy.
The U.S. has consistently warned Iran  against attacking the U.S interest or the U.S allies. President Vladimir Putin says he has a word for the U.S. over current development between the U.S and Iran. What does Putin intend to say or do in this matter? Is the world on the brink of a very serious crisis? Would Iran not use an excuse to punish it for bad behavior turn on its missiles for an all out military engagement?
Senator Lindsey Graham's words say much that if there is no warning to Iran to desist from bad behavior, it will be a sign to other rogue countries to embark on misbehavior, a situation he says President Ronald Reagan did not allow to happen during his time. Again, the U.S. Central  Command in the Middle East had shown a picture of the drone's position on the international waters, when it was downed, and the location from where the Iran's shot emanated.
Comment Form is loading comments...
NEWS AND FEATURES
News & Features Around The World