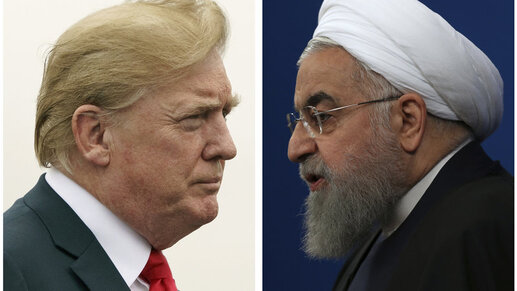 President Donald Trump and president Hassan Rouhani
America's decision to not embark on reprisal against Iran could be seen as a way to continue with the talks toward stopping Iran from further development of nuclear power. And of course, if the opportunity arises that a reprisal is still possible without civilian casualties amid Iran's continued belligerence, a reprisal attack by America to destroy some of Iran's armaments and not humans would not be ruled out.
President Trump reportedly called off a planned reprisal attack against Iran about 10 minutes before the attack, because to kill 150 people as intelligence reports have show would not be proportionate to what Iran did against America.
Almost everyone thought that America had an opportunity to teach Iran a lesson. Political analysts quickly referred to America's experience during Ronald Reagan's presidency as a precedence for Trump to follow. No one considered the likely differences in circumstances and time, and that the political situation at home facing President Trump and and the one against Reagan vary.
But for President Trump, it was time to act and show the world whether he is capable of controlling his temper or otherwise. It was a test for him and his administration. The world at home and abroad expected a reprisal against Iran's belligerence. Even though the political situation in the United States does not encourage such a grandiose undertaking.How would President Trump on war with an unfriendly Congress stacked against him?
Iran's downing of the U.S. unmanned drone happened just few days after President Trump's launch of his 2020 presidential campaign. He seemed to have overcome heated debate about impeachment threat from an unfriendly Congress encouraged by equally unfriendly liberal media, but amid a campaign launch with about $24 million donation within 24 hours. One would have expected that a successful reprisal against Iran would boost and cement his authority at home notwithstanding the Congress bitterness against him.
Equally, any mistake  in the execution of such a reprisal could also be costly to his presidency and reelection bid. Any mistake could empower the unfriendly Congress,  his political enemies and their supporters, who had said Trump had temper tantrum and therefore unsuitable to be president to say their words have been confirmed. It thus mean that If any reprisal against Iran must occur, it needs to be measured and the discretion behind it be manifest to majority of Americans and not allowed to become a burden to a president for whom the opposition would do or say anything to deride him or the administration.
In this case, it was better for the administration to err on the side of caution than to show foolishness in courage and exercise of power. All night all over America, the expectation was high that Iran was in deep hot water and that America fire power would descend on targets in Iran any moment no one can say specifically. Meetings were held in the white house situation room with congressional leaders in attendance. It did not mean the congressional leaders buried their hatchet to unite and make america great. They made their minds known no support for military action, notwithstanding Iran's manifest belligerence. If trump had decided to embark on a military attack with casualties, the congressional leaders would have opposed him.
But against expectations, words came out that President Trump called off a reprisal attack against targets in Iran to avoid heavy human casualties.  News reports say that any attack could lead to the loss of about 150 people. And that President Trump called off the planned attack 10 minutes to take off. Some reports say some planes were already airborne before the recall. Conforming the words of Lindsey Graham (R-SC), America does not want any conflict that would foreclose efforts to make Iran stop discussions on the need to abridge its nuclear power acquisition. On the other hand, Iran is spoiling for a conflict that will disallow further discussions on the need to stop its development of nuclear armament. Therefore, any reprisal by America could be used by Iran to further escalate the crisis beyond manageable proportion, notwithstanding that Iranians would be worse for such a development in a military conflict with the U.S.
Therefore, America's measured response should not be taken for weakness. It should be seen as a reminder of the saying that discretion is part of valor. No one two wars and wins both. The war at home against those who say they have been deprived of presidency and power is there not completely foreclosed and they are not ready to join Trump for any need to bolster his power as a president, when their music is to pull him down.
The decision to not attack Iran immediately to avoid heavy human casualties is itself a demonstration of reason as more powerful than careless use of military might. As the Wall Street Journal reported, the Trumps decision has quietened the tension in the air. Meanwhile, it is obvious that Iran has to be extremely careful to avoid getting the attack that discretion on the part of American leadership has helped it escape. Iran must not underestimate America's fire power against its own little military might. Remember Saddam Hussein and his boastfulness to defeat america. Where is he today?
Iranian Ayatollahs would all escape to foreign countries in the case of an outright military conflict. But where would ordinary Iranians - innocent of Ayatollah's uniformed decisions, go? Innocent Iranians sure have reasons to thank and praise Trump for his discretion that has averted the planned attack against Iran.