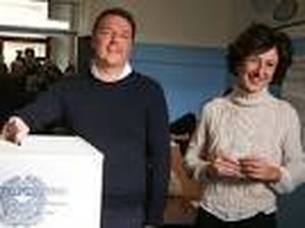 Matteo Renzi and wife, Agnese, voting on Sunday near Florence (Courtesy: BBC)
Left to Joseph and his brothers in Canaan, he would have been left dead in a hole, where he was dumped by his brothers, instead of developements, which later helped toward the realization of his dream.
Everyone knows that there is nothing wrong in dreaming, but the problem is knowing or not, where the dream will lead: either good or bad result, as the difficult aspect of managing a dream.
Matteo Renzi, the Italian prime minister has a dream to lead his country and he has that dream fulfilled. But as a prime minister, he has another dream toward helping Italy further than he currently has powers to achieve. He  has therefore called on the same people, who place him as prime minister to come out again and vote to give him necessary power through constitutional reforms.
If the Italians give Renzi the powers he is requesting through the referendum that will see Italians vote on Sunday for constitutional reform, it will mean 'Yes' to his request and realization of his second dream. He will retain his job as prime minister; sacrifice the second chamber - the senate - and the 315 elected senators will lose their jobs. aGovernment will then appoint 100 appointees from the regions to work with Renzi, along having some powers currently held by local and regional authorities transfered to the central Government. 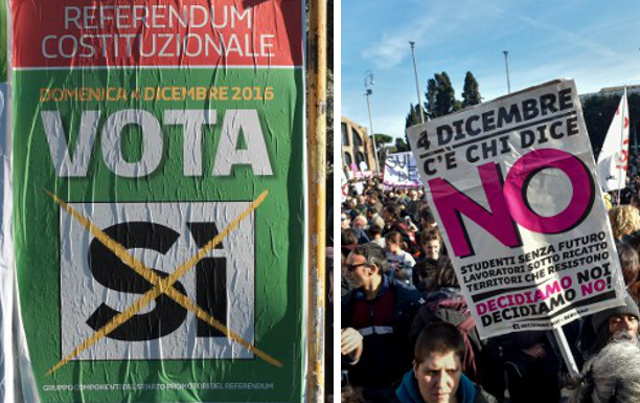 Courtesy: www.the local.it)
The government in Italy says that if the Italians say 'Yes' and Renzi's dream comes true, the reforms Renzi's dream will translate to will end gridlocks in the parliament and make passing legislations easier and quicker. Bureacracy will be reduced and the country will save 490 million euros annually.
Observers say that Renzi's dream is a tall one. Virtually all the senators and all the opposition partuies in Italy are opposed to Renzi's second dream. And the polls results are not in his favor. It is explained that the senators' salaries form a part of the 490 million euros Italy will save annually with Renzi's dream in place, according to thelocal.it. Therefore, there is a Five Star Movement that is leading the campaigns against Renzi's request for the realization of a second dream.
The campaigns for and against Renzi's request have turned Italy to a repetition of the world's scene in Europe between those in  favor of Brexit and those against it. And if those who are opposed to Renzi have their ways and the 'No' wins, the same that the world has witnessed in Britain, with David Cameron stepping down will happen in Italy. And Renzi's party will have to select someone to lead the government.
Renzi has supporters and he has opponents. His opponents are powerful and they also include the ordinary Italians, who see Renzi's request as a way to wrest or grab power, beyond the one voters currently allow his office to wield. According to the local.it online,  all the main opposition parties - populist Five Star Movement, Silvio Berlusconi's Forza Italia and the far-right Northern League, including some prominent figures in Renzi's own camp like the former party secretary Pier Luigi Bersani and former prime minister Massimo D'Alema, and many constitutional experts.
Of course, Renzi is not without supporters and most are from his centre-left Democratic Party and his junior coalition partners. Most business leaders, including Banca D'Italia and Goldman Sachs (not that this will help Renzi in his battle to convince voters he's not part of Italy's 'establishment'). And that he is part of the Italy's establishment is amking observers fear that the the wind of change that has blown across Britain and the United States may be on its way to Italy.