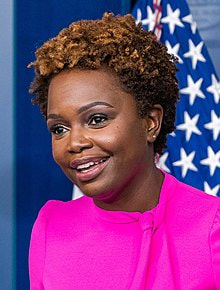 Karin Jean-Pierre, the White House press secretary.
"You know we work well together," was the statement by Karine Jean Pierre, the White House press secretary, in her response to Ed O'Keefe's questions over classified documents found in President Joe Biden's possession. It recalls a lesson in Media Ethics.
Journalism students go to class to study the rudiments of ethically acceptable conduct in the media profession. But, of course, events have shown her needing to work better with the press corps. So, her statement of working well together arose to evade the development.
Curious observers say that as a media personnel in the White House who had often walked out on the corps, she could not have been referring to the entire reporters during her briefing when she said, "we work well together." They infer her reference was to the Liberal media, not the whole media. Unfortunately, they tell her work as a press secretary does not require working well together with anyone as there are bounds to be controversial moments when professional reporters could expect her to be above the shadow irrespective of ideological bent.
Another school of thought says O'Keefe works for CBS, a Liberal media. So naturally, it must have shocked Jean Pierre that a Liberal media reporter could make things difficult for her, unaware that there are moments when a journalist would ask an ethical question without a thought of who their employer is but the seriousness of an issue.
But Jean-Pierre Pierre was out to defend her principal at all costs. When Peter Doocy asked, "How irresponsible?" Referencing President Biden's past remark over President Donald Trump's keeping of classified documents in his Maralago home, Jean-Pierre unequivocally said it was Biden's personal opinion! Does it matter whether it was a personal or official statement?
But rather than help the president's position in the classified documents crisis, it has deepened the question about the hypocrisy of the president holding no bare criticism of his predecessor when he is committing the same offense. Should one teach Jean-Pierre, who has worked as a deputy press secretary under Jen Psaki, served in the same position in the vice-president's office, and was at MSNBC as a political analyst about media ethics? Do you have to be a professional journalist to be a successful press secretary? Was not Jean-Pierre aware a president's remark (personal or official) carries weight?
Events have shown that most press secretaries' mistake, whether former professional journalists or not is that they think they serve their principals rather than the public. Therefore they need to find out if they occupy a public office. A press secretary not only needs to be a professional journalist but also requires knowledge of public administration.
There are litanies of press secretaries, former journalists, and non-journalists worldwide who have lost integrity for their lack of ethical focus. So what we are witnessing in the U.S., where belonging to a political party in power decides to get the job, is not separate. It is a sickness of exhibiting a political sense of belonging to get a job.
The ladies on The View have also misinformed the public. They said Republicans may have planted classified documents against Biden to help Trump! Are these ladies educating the public or otherwise? Do these ladies not think before they talk? Has Biden not said the documents were in his locked car garage?
Can anyone believe that any media organization would continue to allow this to happen? What unethical act can anyone in a media house exhibit to attract punishment?
NEWS AND FEATURES
News & Features Around The World