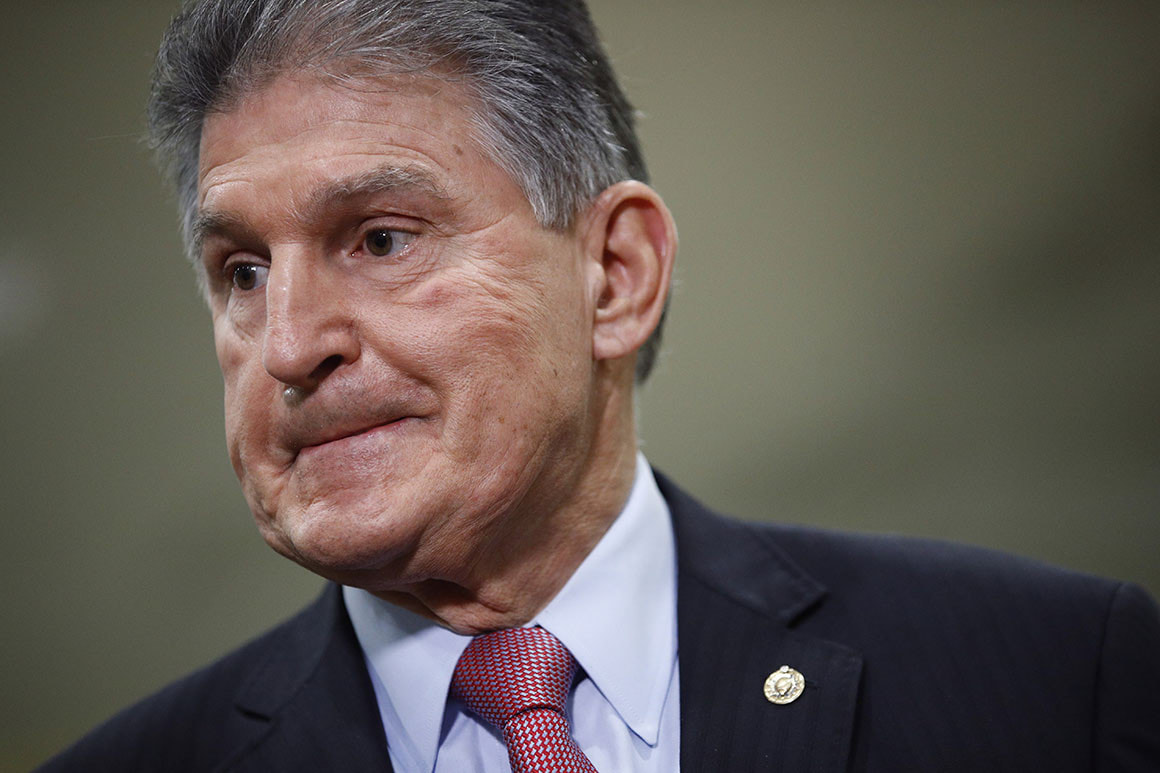 Senator Joe Manchin of West Virginia (Courtesy: Politico)
What is Democratic Party's problem? Is Senator Joe Manchin the problem or the progressive members of the party? These questions have arisen following news reports that the senator from West Virginia has decided to vote against President Joe Biden's infrastructure bill that is pending passage in the Senate.
Expectedly, Manchin's opposition has thrown the progressive members of the party against him. Some of the ruling party members have questioned the senator's loyalty to the party. They are members of the party who want the bill like an elixir against a deadly disease. But senator Manchin said the proposed law is not suitable for the country and that his constituent in West Virginia do not approve the bill as it is currently.
The argument against Manchin by his Democratic Party contenders has led to another question about the public interest. Is Manchin touting the public interest, and the progressives routing for the party's interest? The development has thus resurrected the debate over the public interest and party's interest and the difference between the public and the party's interest. The party believes that passing the infrastructure bill is in the public interest because the bill will provide the fund for the execution of programs without a thought about the cost to the nation.
The problem for the progressives now is that Manchin is a member of the same Democratic Party. The argument will be different if Manchin is a member of the Republican Party. Observers are curious. They want to know why the progressives call Manchin names for opposing the passage of a bill he says needs reworking.
News reports have shown polls from West Virginia indicating opposition to the bill. The polls show that Manchin does not want to do anything he cannot defend before voters in West Virginia. People are saying the progressive members of the party may need to present polls from their respective constituencies approving the spending bill to sway the public against Manchin. Meanwhile, Manchin is the man the public sees as the defender of the public interest based on poll data and the staggering amount involved in the bill.
The Democratic Party requires the vote of all its senators for the bill to move forward. The Republican Party is opposing the bill. Manchin's opposition means a roadblock to the majority members of the party. Aside from being a blockade for the spending plan becoming a law, the senator's lone opposition could encourage additional opposition from other members who may have decided to comply with the party's interest.
Remember that Manchin was a co-traveler with Senator Kyrsten Sinema of Arizona before the passage of an earlier spending bill after amendments caused by the duo's opposition to the Democratic Party's lack of restraint to spend. The party has said the $1.7- Trillion bill will not cost the nation a dime. But the Congressional Budget Office, CBO, has said the bill will cost or add $3-Trillion to the nation's debt.
Most glossed over is Manchin's insistence for the bill to be trimmed to $1.5-Trillion and for which he has reached an agreement with members of the White House. But still the administration is still going ahead with its original $1.7-Trillion. Looked at conspicuously, it is the CBO that has undone Biden's Build Back Better, and not Manchin whose position is standing on the side of defending the public interest.
Widget is loading comments...
NEWS AND FEATURES
News & Features Around The World