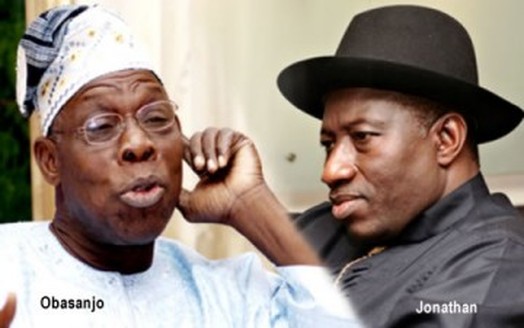 Obasanjo and Jonathan
Barely one week that former president Olusegun Obasanjo wrote a letter described in the press as a bomb to President Goodluck Jonathan following another letter by the Central Bank's governor, alleging fraud in the NNPC's account, the opposintion party had made a dangerous request to the National Assembly for the president's impeachment.
NNPC's group managing director has made a clarification about the alleged fraud in the corporation's account. What the opposition rests its call for Jonathan's impeachment is based on the content of Obasanjo's letter, economic situation in the country and mass unemployment among the youth. They are saying that the allegation that the president has been training fighters and a plan to kill one thousand prominent people shout;d be ground for impeachment without first seeking investigation.
The president's spokesman's Reuben Abati reacted with a reminder to the opposition of treason. But the question most people are asking is what the former president (Obasanjo) wants to achieve by his do or die opposition against the incumbent president he is accusing of murderous allegations, when he as a president of the country for two whole terms does nothing to inspire others. People are asking whether it is by throwing the country into chaos that he will achieve his aim that he feels cannot be achieved through the ballot box.
When the 7 governors in the president's party began their agitation to hijack the party from the president, words went round that Obasanjo was one of the people behind the governors' disloyalty to the incumbent president. And at the same time, he was acting the peace maker. 5 of the 7 governors have crossed over to the opposition party and the ruling party has gone to court to challenge the governor's defection.
The opposition party is claiming it has enough governors and members of the National Assembly to win the 2015 presidential election. But now it has suddenly dawn on it that it has no need to wait for 2015 to contest an election, but prefers to seek the president's impeachment.