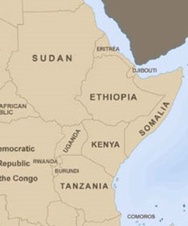 Border with Somalia
Kenya is estimated to lose Sh50 billion and 500,000 jobs between May and October 2014 for flight cancelations by a tourist company for security reasons. The cancelation of the flights is causing a rift. Kenya's Tourism Federation, chairman, Adam Jillo, said the US, UK, Australia and France did not consult Kenya authorities prior to their decision to evacuate their citizens from Kenya last weekend.
Jillo also criticized the Kenyan government for insufficient security to assure tourists that Kenya is a safe destination. About 600 tourists reportedly left the country to UK in chattered planes. 900 tourists are expected to leave.
Comments by readers on the report published by the Kenya's Daily Nation newspaper showed that Kenyans wanted their government to do more providing security, and that foreign countries did not need to inform anyone before evacuating their nationals in view of security threat in the country.
The drama over insecurity in Kenya and foreign countries flexing of muscles for the love of the citizens began when some foreign countries issued travel advisories to some areas in Kenya viewed as terror targets. The Kenyan authorities were reported to have reacted sharply against foreign countries issuing advisories that will create fears among the populace. The next scenario was the evacuation of tourists and large cancelation of flights.
Kenya is one of the African countries visibly under terror siege. Others are Nigeria, Mali and Somalia. Kenya is suffering from an extension of the trouble in Somalia, a country it shares common border in the east.
France has helped Mali to stake away terror from torpedoing the government in the country and from endangering the country's political system. Terrorists are still operating in the north of the country. Somalia and Nigeria are visibly the current epicenters of terror. What is happening to Kenya explains the importance of the resolution at the France meeting at the weekend, empowering countries in the fight to free abducted Nigerian girls do cross border attack against terrorists. With that resolution, none of the countries in the agreement will harbor terrorists.
Despite the intense killings by terrorists North East of Nigeria and incursions into the North Central and Abuja, foreign countries have not deemed it necessary to evacuate their citizens. But there have been times the US warned its citizens about where to go and where not to go in the country. With sudden evacuation of citizens by foreign countries in Kenya, Observers say Nigeria should consider itself lucky it has the support of foreign countries toward eliminating terror in the country.
Kenya's problem with the Al-Shabbab terrorists arose from the border it shares with Somalia, just like Ethiopia in the same geographical location. The bombing Uganda suffered led to the loss of over 70 people, when a stadium was bombed and Al-Shabaab claimed responsibility as a revenge for the role it said Uganda had played against it. The same vengeance has been targeted against Kenya leading to the attack on a mall and the death of many foreigners.
NEWS AND FEATURES
News & Features Around The World