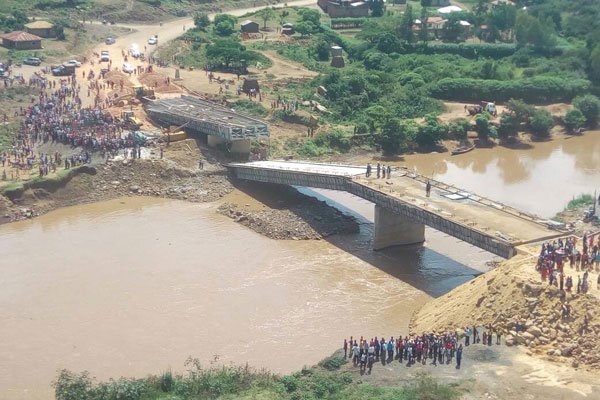 The collapsed bridge (Courtesy:DailyNation)
With the collapse of a bridge on Monday, two weeks after commissioning, one of the reasons that Kenyatta has set to use for his reelection has turned into a setback,
Consequently, the opposition led by Raila Odinga, has attributed the bridge collapse to shoddy work to rush the bridge work to Kenyatta's advantage.
Kenyans in the areas affected by the absence of the bridge, are known to lose lives crossing the water.
Ironically, Kenyatta's government has no answer to the bridge collapse than to stop further work on the bridge, while investigating the cause of the collapse.
Sigiri Bridge under construction in Budalang'i Constituency, Busia County is a  Sh1.2 billion project managed by Chinese Overseas Construction and Engineering Company. 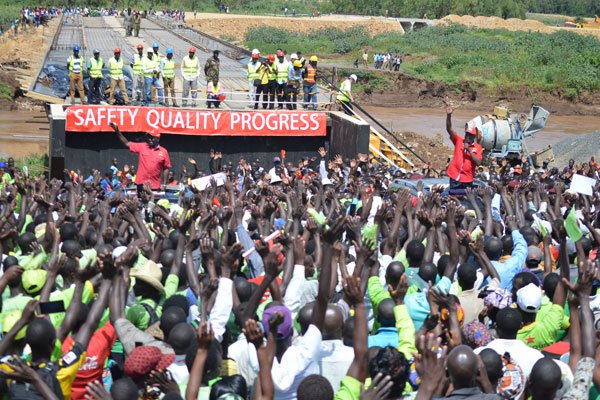 The bridge being commissioned by Uhuru Kenyatta, a fortnight after its commission (Courtesy: DailyNation)
It is not unusual for politicians in power to embark on construction works as part of election campaign  promises fulfillment. And political observers have often questioned the rationale behind quick construction works close to election period by politicians.
Politicians are always quick to say they are giving back to the electorate and that such works are fulfillment of their campaign promises.
​   The collapse of the bridge is essentially a rebuke and condemnation of the campaign's motto: Safety, Quality and Progress. The collapse means the use of safety and quality by the campaign has no meaning.
Kenya is holding its general election in August, less than two months to the time Kenyatta's commissioning of the bridge that has collapsed.
Now, rather than for the bridge to raise the hope of reelection for Kenyatta, it has dimmed the hope for his reelection.
According to the Daily Nation newspaper report online, the bridge is to link Bunyala North and South wards across River Nzoia Just as the bridge has dimmed the reelection of Kenyatta in that area, where the bridge is being constructed, the people's joy that their problem of losing lives crossing the river may have come to an end has turned into a disappointment, with no timetable about when the construction will resume again.
Of course, observers say that if the bridge construction has made residents in the area to think about voting for Kenyatta's re-election, questions about the cause of the collapse, and listening to the reason advanced by the opposition, cannot be of help to Kenyatta.
NEWS AND FEATURES
News & Features Around The World