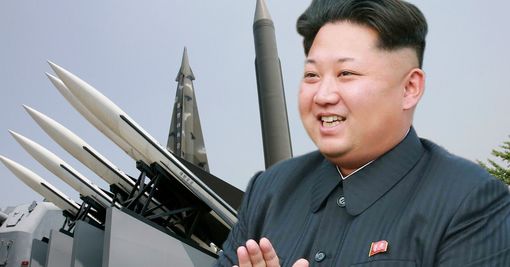 Kim Jong-un and his missiles
People around the world woke from sleep on Monday and learned that Kim Jong-un's North Korea tested another missiles over the weekend.
But the latest tested missile was reported to have traveled far than expected, but it ended in the ocean near Russia.
Was something wrong with the testing, that instead of targeting the direction of midland United States, it ended near Russia?
Jong-un's North Korea is inescapably inserting himself into trouble between two super powers. First be , he is openly against anything about the U.S., and he is said to be dreaming of acquiring missiles capable of attacking San Francisco in the U.S.
There are news that have said that North Korea already have missiles capable of reaching the heart of the U.S. There are others saying that he is still trying to acquire one and that until he succeeds in his evil ambition to attack the U.S, he will not sleep. Which brings about the question about when attacking a country becomes a holy ambition.
What does Jong-un stands to gain from his evil ambition against the U.S? Is it just a case of saying that he succeeds attacking a super power, an ambition that is capable of showing him or his country as powerful as the U.S? But in testing a missile last weekend, the tested missile either missed its direction or its testers lost their senses and they failed to realize the direction their tested missile headed.
News reports has not indicated, where the tested missile from North Korea landed near Russia. Did the missile flew over Russia and landed north of Russia or the missile just landed east of Russia close to North Korea? But still, even if the missile flew over Russia and landed north of Russia, it was still way far from the U.S.
What the present demonstration of lack of know-how from North Korea will present to Vladimir Putin is a mere laughter. He will say something like look at that stupid boy targeting the U.S. mainland far to the West, but its tested missile has landed near us here. He will ask about the type of trouble that Jong-un is looking for. Is it for his country to be annexed and be come part of Russia or to become a struggle between Europe and Russia?
The trouble Jong-un will place his country for making Russia to see it as a problem to be solved is that North Korea is closer to Russia than it is to the American hemisphere. North Korea actually shares a common border with Russia, just as it does with China. All that Russia needs to do in term of diplomacy if it feels north Korea is becoming too troublesome than necessary is tell China to annex North Korea or it will annex it, if China fails to act and put North Korea, where it should belong.
Since it is not certain that North Korea knows what it is doing in term of ballistic missiles acquisition and testings, it may one day test a missile that will hit either China or Russia's mainland, instead of the U.S. mainland, and the trouble from the mistake will end Jong-un.
Comment Form is loading comments...
NEWS AND FEATURES
News & Features Around The World