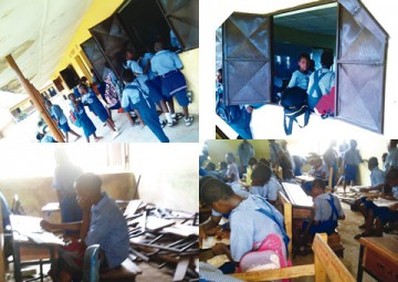 The schools as reported by the Nigeria Punch Newspapers
A school principal in Lagos, Nigeria, has been reportedly relieved of her post for giving the press access to document the poor environment students in the school attend classes. According to The Punch Newspaper that reported secondary schools in Lagos State, where pupils sit on bare floor for classes, two major schools, one in Mafoluku and another school in Ikeja, came under the newspaper's scrutiny.
And for allowing the news reporter’s access into a school for the coverage, the State Government has reliably terminated the school principal, whose name was not revealed for allowing the news man speak to pupils and take photographs.
One of the teachers in the xchool was said to have told the reporter on a return visit that the case was more serious than he he though and that the school was have put this school in trouble, because the education ‘oga’ (commissioner) and other state officials had summoned the principal on Monday and that she had been removed from her position.
Another teacher in one of the classrooms, where the reporter took a photograph of students sitting on the floor and broken desks, was reported to have been queried.
The state government has reportedly embarked on a hurried supply of furniture to affected schools to cover up its deficiency contrary to public's perception of it as one of the best run states in the country.
The Punch Newspaper's earlier report had covered Ikeja Grammar School in Ikeja, the state capital, and later followed up with another report on Ewutuntun Grammar School in Mafoluku, Oshodi.
In another development, Ansar-Ud-Deen  school in Ile-Ife, Osun State, attended by this reporter and adjudged one of the best elementary schools in the city with infrastructure that pupils were proud had dilapidated. The reporter could believe his ears when he was told by an old school mate now in a senior government official in one the state governments in the South West of Nigeria.