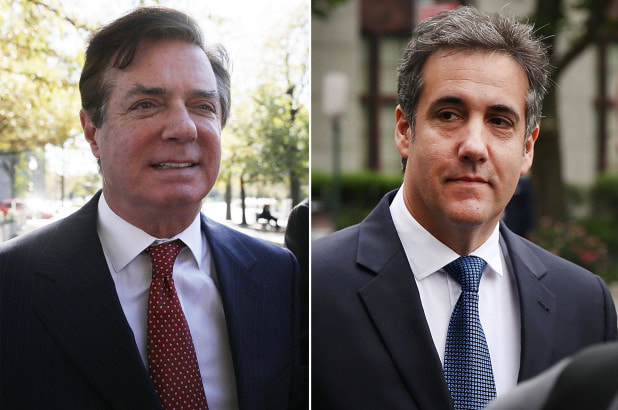 Paul Manafort and Michael Cohen
Michael Cohen on Tuesday pleaded guilty on eight count charges for wire and bank fraud, while and Paul Manafort was found guilty similar offenses on eight count charges out of 18 charges brought against him.
This has brought a reference to ‘figure eight’, a number mostly used to define beautiful women, into questioning and ridicule.
People easily make reference to figure eight as applicable to beautiful women, with  Cohen’s admission in court to paying hush money to two women, to influence the 2016 election fits the scenario.
Earlier in the day, it was reported that jurors in Manafort's case passed a note to the judge hearing the case about what will happen, if they the jurors cannot agree on a particular charge, and the judge told them to go continue on their deliberation and to rely on their own conviction and not any opinion he had aired in court.
Manafort was found guilty of eight counts out of eighteen for wire and bank fraud, while the judge declared mistrial for the remaining 10 charges. The government may decide to seek a new trial for the 10 cases. Making Manafort's experience a turning around from positive to negative, as he is likely to spend the next decade in jail.
New York Post reported, citing a university professor that Cohen's disclosure in court on Tuesday that he paid two women off with hush money on the direction of a candidate to influence the 2016 election, though Trump’s name was not mentioned, may create trouble for Trump.
Washington Post reported that prosecutors charged Manafort failed to pay taxes between 2010 and 2014 on millions of dollars in overseas bank accounts which he kept hidden from his accountants and the IRS. He earned that money working as a consultant for Ukraine’s then-president, Viktor Yanukovych. Yanukovych fled Ukraine in 2014 amid massive street protests, causing Manafort’s income to dry up, according to witnesses.
One of Manafort's assistant called ' 'Gates' and another one named as his bookkeeper, testified against him. But Manafort's sins are not connected with the alleged Russia's influence of the election being investigated by Robert Mueller.  While President Trump has continued to make this clear in all his reactions to Manafort's trial that Manafort had worked for Bob Dole and for Ronald Reagan and himself, and that Manafort’s trial has nothing to do with Russia or himself. And he stands solidly behind Manafort.
Although, none of the two men known to be close to Trump is being tried for Russia's alleged interference in the 2016 election, their cases can still be seen as arising from the storm around Trump.
Comment Form is loading comments...
NEWS AND FEATURES
News & Features Around The World