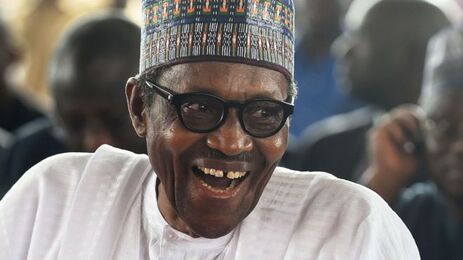 President Muhammad Buhari of Nigeria
There is a discordant tune coming from Nigeria, as a large number of people are crying over lack of direction in the country's affairs, and government apologists are saying the crying of many Nigerians is political amid basket of woes, that include economic dislocation attended by high unemployment rate among university graduates and other cadres.
Many Nigerians point to lack of security occasioned by what they describe as unusual killings by herdsmen from the Fulani tribe, a development some people describe as  fast turning into an invasion in some parts of the country, creating a near resemblance to Boko Haram's invasion of the North East of the country, and attacks on Christians in some areas in the northern part of the country.
Another horrendous development is the government's nonchalance attitude to the entire scenario that is making a whole lot of people think and say that government is behind the Fulani's killings. While many Nigerians are calling for government's intervention to save the country from journeying  further into the wilderness, the government comes up with a program called RUGA aimed at creating permanent settlements for herdsmen all over the country..
Nigerians in several parts of the country have cried foul against the government's RUGA plan, saying it is a plan to take over land from owners around the country and the lands over to the Fulani tribe. Yet, there are groups north of the country that have approved the same RUGA plan vehemently opposed by the southern states. But what curious political observers find disconcerting about the Nigerian leader's sense of management is that three months after winning a reelection as president, he has not  formed a cabinet to begin works toward resolution of what has become Nigeria's basket of woes. (To continue)
The same trend followed his first election victory in 2015 after he defeated the former president Goodluck Jonathan - spent months as a president without a cabinet. His lack-luster performance has given room to Nigerians calling all sorts of names  with his slow pace of performance. He has blamed the democratic culture in comparison to ruling with military decree. No Nigerian knows what is impeding his chosen a cabinet. Many Nigerians interviewed interviewed for this reports said that just did not want to say anything about Nigeria with a confession of being tired of the country and the leaders, especially the president's lack of response to issues affecting Nigerians at home.
James, a Nigerian resident in Manhattan, New York, said that the situation in Nigeria is chaotic. James views of not believing there is still a country called Nigeria  aligns with Nigerian newspapers reports and comments in the social media about drums of war and Nigeria's journeying towards a civil war, following the killing of a woman described as a daughter of a top political figure in the South by herdsmen's stray bullets during a disturbance near Ore on her way from a journey.Observers believe that the herdsmen have turned Nigeria into an ungovernable entity for the president.
The government's earlier response was to tie the Fulani herdsmen incursion into the country political trouble as part of Libya's trouble and the lack of control over cache after Muamar Gaddaffi's fall. But no apparent solution to the herdsmen killings seems to have surfaced, unlike in Ghana where the president issued a warning to Ghana's law enforcement to eliminate any herdsman who tires to turn Ghana into Nigeria. Consequently, many Nigerians say President Buhari is protecting the herdsmen because he is of the same  Fulani tribe with them.
Many Nigerians arriving abroad from home allude to the political and economic and in extension to unmitigated social trouble in the country. They talk about kidnapping by Fulani and kidnappings by other criminals that have become a daily staple. Hunger has turned many Nigerians to desperately seeking solution outside the country, trailing a rate of unemployment that the country cannot give its actual level. It is a case of unemployment towering greatly above employment availability. Youths who are supposed to be gainfully employed cannot find employment and thus turning into instruments in the hands of the devil.
Politically, observers are saying they don't believe that President Buhari is still in power.Rather, they say that a powerful political group may have taken over power and doing what pleases its agenda against the wishes of Nigerians, while the president is seen as   a mere figure head without power. Or that he has power and he is using the power to oppress Nigerians, allowing all sorts of evil that should not be allowed in a country to prevail over the good health of the country.
Though, his government is said to be bent on a fight against corruption, observers say that his government is not better than the past corrupt governments he is fighting in term of corruption of government personnel. Nigerians who are caught in the political and economic strangulation are seeking a renewal. How such renewal  will happen is what no one can say. despite a fight in the election tribunal to void the president's reelection.
There are conclusions in several circles that Buhari has failed and that his failure is beyond redemption. Of course, it is a bad time for Buhari's image makers, struggling to convince Nigerians to the contrary.