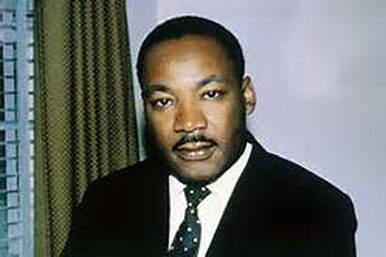 Martin Luther King jr.
"Now is the real time to make real the promises of democracy," Martin Luther king Jr.said in his popular "I have a dream speech", which he delivered in 1963, 100 years after the emancipation proclamation.
According to him, the speech was to remind America of its obligation to the Negro race under a new America of its promise that "all men, yes, black men as well as white men, would be guaranteed the unalienable rights of life, liberty, and the pursuit of happiness."
King Jr.'s dream was tied to his faith as a pastor that justice will one day roll down like waters and righteousness like a mighty stream.."This is our hope. This is the faith that I will go back to the South with. With this faith we will be able to hew out of the mountain of despair a stone of hope."
There was racial injustice. He sought racial justice. There was division between races, he sought a solid rock of brotherhood. He warned, "Let us not seek to satisfy our thirst for freedom by drinking from the cup of bitterness and hatred. We must forever conduct our struggle on the high plane of dignity and discipline."
Is hatred and bitterness not prevalent in American politics today than love and brotherhood? The difference is politicians of all shades and characters and majority of them are careless about discipline and dignity, unlike a minister of God like King Jr., who first considered all as God's children. Politicians first consider self and others based on their parties and political ideologies. Many politicians don't believe in God's existence and not talk about respect for God. They lack the type of faith and hope that King jr. exhibited. It is one thing to mention faith and hope like many politicians do to catch votes, it is another thing to believe in their possibilities. King jr. as a minister of God believed in their possibilities.
King Jr. is an example that one could give to many homes or parents about the words of the scripture that says, "Teach your children and they will give you peace." King Jr.'s parents taught him and he in turn taught the community that he belonged in search of peace. "With this faith we will be able to transform the jangling discords of our nation into a beautiful symphony of brotherhood. With this faith we will be able to work together, to pray together, to struggle together, to go to jail together, to stand up for freedom together, knowing that we will be free one day."
The greatest news about Martin Luther King jr. is that he believed in the good news. The good news that the world does not believe in its truthfulness and does not believe in its propagator. Jesus Christ was the propagator of the good news and he called on the world to embrace the good news. The world instead of embracing the good news killed him. For those who believe in the good news, he said he gave life everlasting.
Luther King Jr. did not only believed in the good news, he became the propagator as a pastor and his dream that he had,was in some ways, part of the good news, because his message streamed from his trust in the scripture. The most fortunate in Luther King Jr.'s life was that his father was also a pastor and he took after his father to be propagator of the good news, just like his father and Jesus Christ and his life is everlasting, though he was killed like Christ for his words that streamed from the scripture. King jr. was too much for this world.
What was Luther King Jr's dream?  To speed up that day when all of God's children, black men and white men, Jews and gentiles, Protestants and Catholics will love and be able to forgive one another.. He did not preach disrespect for the rule of law. He did not preach unlimited abortion. He did not preach allowing gangs to mess up the community. He did not preach an open border for politicians to use to catch votes. Love and forgiveness and struggle without destruction of the peace were his watchwords.
King Jr.'s goal is for all humans to be treated with respect and be accorded what they are entitled as naturally becoming human beings despite differences of color and language. No, he did not say people should choose to be illegal immigrants and that medals of honor be instituted for illegal immigration. There are many things that have gone wrong with humanity today that Luther King Jr. would not approve as a minister of God. The pain to people who know is that there are no more ministers of God of Luther King Jr.'s mode. Avarice has taken over the pulpit.
NEWS AND FEATURES
News & Features Around The World