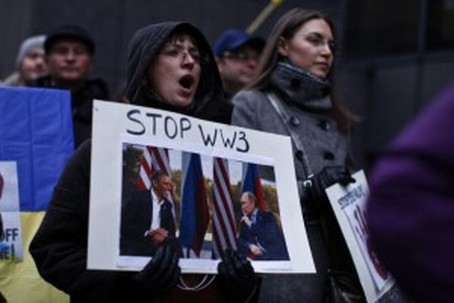 Some fear that Ukriane crisis is capable of leading to WW3 (Courtesy:kyfo.com)
Three months ago, Ukrainians began a struggle over fiscal issues. They were hardly aware that the country's problem had just started. Just two weeks ago, the problem snowballed into the running of the president and his opponents declaring a new government. The fugitive president described the new leaders as violent and that they had seized power. For two days, no one knew the whereabouts of the president, while the Ukraine MP's pushed forward with selection of an interim leadership, chose May 2014 for an election and declared the president wanted for murder.
Few days later, Russian forces moved into Crimea, a part of Ukraine with predominantly Russian speaking population and began asking members of Ukraine forces there to deflect, after the people in Crimea seized the parliament and appointed a new leader.
Russia's occupation of Crimea has put the world on the edge and prolongs Ukraine's uncertainty. Still, ordinary Ukrainians are unaware what direction the tide of events will take. Will this lead into a civil war or a permanent division in the country? The country is already broke and on the ground waiting for an IMF's surgery. Russia had pulled the $15b loan it had granted the country with uncertain political development there. Ukrainians are suddenly faced with an equal of dose of unrest like the world witnessed in Egypt that resulted into almost a thousand death; of unrest capable of leading to what the world has been witnessing in Syria. A side of hell the world had witnessed in Iraq and Libya. Uncertain of a recurrence of Rwanda, Congo and Sudan, given the language differences in Ukraine. But the players in the Ukraine's game have started thinking about a winners and losers, and nothing about the consequence of events in the country to ordinary people.
The reality stunned with Russians' decision over Crimea. It suddenly damned on supporters of new Ukraine leaders that the new Ukraine and the leaders face a danger worse than that of the fugitive president, because the fugitive president still has power to challenge those who have deposed him. The fear increases to possibility of Russia helping the Russian speaking population in the east of Ukraine to carve out their own country from the mainland. Meanwhile, the Russian strongman, Vladimir Putin kept his cards to his chest, leaving the western leaders to talk out all the words of opposition against Russia's decision to send soldiers into Ukraine.
When Putin talked, he proved a staunch supporter of the fugitive president. He described what happened in Ukraine and the fugitive president as a coup. He said that the leaders in Crimea had taken initiative to protect themselves against new leaders in Ukraine and that the Russian soldiers there are to ward off the unexpected. The Russian government said that the fugitive president had asked for military assistance to stave off the unexpected from predominantly Russian population. President Barack Obama said afterwards that there is every reason for Russia's initiative, but said Russia still had no reason to interfere in Ukraine's internal affairs. Putin says that there is room for options to resolve the Ukrainian debacle and that military assault will be a last resort. Leaders in Ukraine had said that they rely on America and UK for security, while it said it had put its army in battle readiness alert and the Reserves are training for any eventuality.
Analysts have said that Russia is ready for the worst of sanctions over developments in Ukraine, as long as it is able to push back the new leaders in Ukraine or save the Russian speaking population from domination by the new leaders. America had rushed announcement of $1b loan assistance and followed by the EU's $15b, in replacement of the earlier $15b loan assistance withdrawn by Russia. The rowdy noise over Ukraine has not seized. The fear of war hangs over the country. Ukrainians at home and abroad are in fears. Russia is refusing to recognize the new leaders in Ukraine and effort to bring the Russian foreign minister and Ukraine foreign minister together in a talk has failed. America's John Kerry has said that the talks toward a solution will continue. America has announced sanctions against Russia and the EU is mauling its own sanctions.
Meanwhile, Ukrainians and the part of the world who believe in prayers are communing with their God for Ukrainians to be saved from what is happening in this part of hell that may lead to what has been witnessed in Libya; Iraq, Rwanda, Liberia, Sierra-Leone, DR Congo, Syria and condemnable percentage in the North East of Nigeria, almost forty years after after decimation of innocent millions of souls in avoidable civil war.
Comment Box is loading comments...
NEWS AND FEATURES
News & Features Around The World