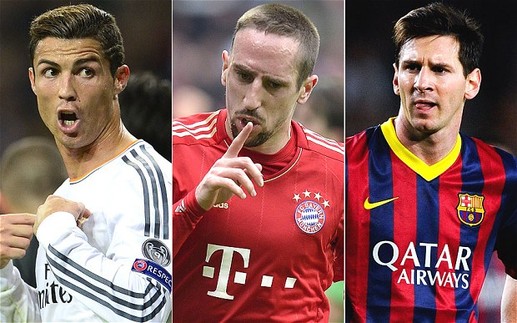 Ronaldo, Ribery and Messi (www.telegraph.co.uk)
One of these renown footballers - Lionel Messi, Franck Ribery and Cristiano Ronaldo - will be named 'Best Footballer of the Year' in Zurich, today.
Who will wear the crown for the next one year as FIFA's Ballon d'Or 2013?It is a question many football analysts have been trying to proffer an answer for the past few days, but which only the FIFA has the final decision.
Cristiano Ronaldo is the choice of many observers and football analysts, who say that 2013 has been his best year on the field. But since observers or analysts' verdict is not necessarily FIFA's verdict, all eyes are watching to see what will happen in Zurich, because the other two footballers are not push overs and only FIFA knows what yardsticks it uses in arriving at its decision.
Messi has been World's 'Best Footballer of the Year' for four years. Will he be named the fifth time? People are doubting and not because he is no longer a good footballer. People think and say that since he has hit more than the triangular run, it is better that FIFA should pick another footballer to encourage other footballers to bring their best to the field.
Ronaldo won the trophy last in 2008. Ribery, a France winger is a new entrant. Reports say that Ronaldo's goals in 2013 totaled 66 from 56 games;Messi - 42 and Ribery - 22. The total number of goals is just one factor in the arrays of others that are considered in choosing the winner.
Analysts who favor Ronaldo and Messi are almost trying to outdo one another in recommending their favorite, while Ribery seems to be left in a vacuum. Some observers are saying that Ribery that not many people have given a chance may be the man of the day. And people say that this is not impossible as long as he has made the list of three, he might as well be the man just like Messi or Ronaldo might also be winner.
For example, Messi who just arrived back into the field of play after two months on the bench due to injury has scored two of the four goals by his team last week and this has become part of the fine performances analysts have advanced for his cause.
One of Ronald's teammates is reported to have said that his own beautiful goal last week vis his spectacular performance has been possible because Ronaldo advises him and that he has benefitted in assists from him in getting goals.
Andy Brassel, a European football expert, writing in the BBC' Sports online, says that Ronaldo does not need the FIFA's top player award to to prove his excellent performance in 2013, and that if he wins it will only be the icing of the cake for him.
HTML Comment Box is loading comments...
NEWS AND FEATURES
News & Features Around The World