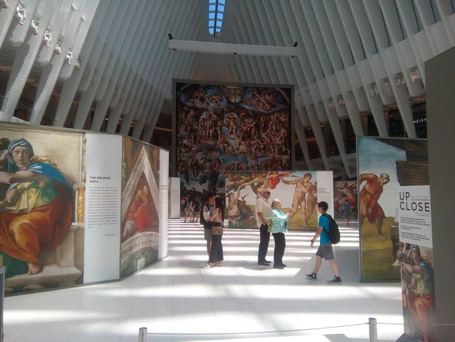 Seeing the photo of Michelangelo's "The Statue of David",  on display at the World Trade Center Oculus in New York City, uninitiated person may think it is an invitation to a hard rock sex show.
But for the educated, who has been through college and has learned about the Renaissance, the picture of the naked man will not make him or her think about something unusual.
There the man stands in a post naked, nothing concealed. It is the Michelangelo's show. The public is acquainted with the event on a sign post that reads, "Michelangelo's Sistine Chapel: Up Close."
The Oculus at the World Trade Center at best represents a cross road for many people traveling around New York City, since there is hardly a train that does not stop at the Fulton Train Station.
It makes sense as the best place to have such a show to make people stop and see what is happening, without necessarily having an initial announcement or advertisement.
The show has been in progress for about a week. There is announcement on electronic sign posts about the show on the wall through a pathway from the Path Train station leading to the World Financial Center before the escalators and going up to World Financial Center or coming down the escalator to the Oculus through the pathway. . 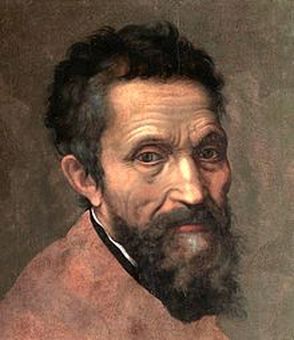 Michelangelo's portrait: By Danielle Volterra
Who is Michelangelo? Michelangelo di Lodovico Buonarroti Simoni, 6 March 1475 – 18 February 1564) was a Florentine sculptor, painter, architect, and poet of the High Renaissance who exerted an unparalleled influence on the development of Western art.  Considered to be the greatest living artist during his lifetime, he has since been described as one of the greatest artists of all time, according to Wikipedia.
Information on Michelangelo continues: "A number of Michelangelo's works, that include painting, sculpture, and architecture rank among the most famous in existence. His output in every field of interest was prodigious; given the sheer volume of surviving correspondence, sketches, and reminiscences taken into account, he is the best-documented artist of the 16th century."
At college, most students take the art class as minor, and they are only accessible to just a part of Michelangelo's works in comparison to that of other artists like Leonardo da Vinci, ased on this reporter's experience. Based on the collection at the Oculus at the World Trade Center, viewing from outside, there may be more of Michelangelo's works on display more than one may have seen in college.
​ 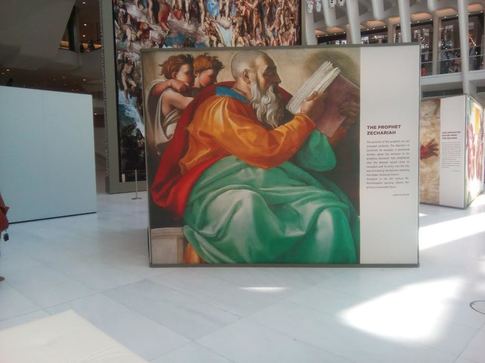 A good example is the presentation of  Michelangelo's Prophet Zechariah's painting showing at the Oculus. There are whole lots of other paintings seen from outside, and others barricaded from people outside, and only accessible to those who have tickets to go inside the enclosure.
There is security to prevent people from trespassing through open walls around the enclosure. All it requires for interested members of the public is to go to a gate artificially created, buy a ticket at $20 for adults, $15 for senior, military and students and free for children under 12, who must be accompanied by adults.
The show is billed to run through June to July 22, 2017. From the collection of photographs taken at the show from outside the enclosure, there is a rich resource at the show for students and lovers of art to benefit from.
Michelangelo is a part of the history of Renaissance and the change that has gripped the world and seems to not letting go.
Comment Form is loading comments...
NEWS AND FEATURES
News & Features Around The World