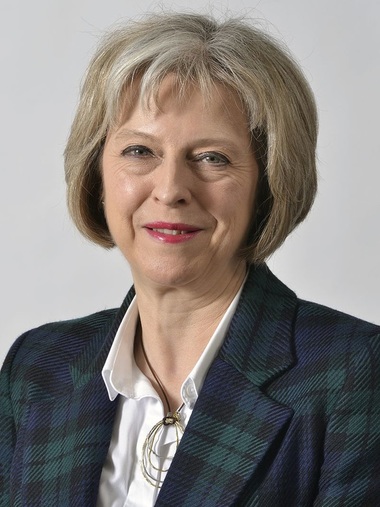 Theresa May, the incumbent Prime Minister in the United Kingdom (Courtesy: Wikipedia)
Theresa May as home secretary had given a threshold of income that immigrants from countries other than the European Union must make to live in the United Kingdom. Efforts are being made to make her take back a policy many observers see as targeted against struggling migrants, despite their having required papers to live in the country.
Rather than for the migrants' prayers in the UK for the vanquish of May and her evil immigration policy to be answered, they have seen May elevated from the position of home secretary to that of prime minister, and the hope of ever seeing May's immigration policy dead dies, meaning that migrants in the UK would have to work harder to earn the amount stipulated in May's policy to escape getting thrown out of the country.
If migrants in the U.K, who have legal papers to work and live in the country are given condition exactly like the one that Israelites had in Egypt of the Pharaohs, what would happen to illegal migrants? No one has cried against May's policy as an attack on legality and that introducing such a policy is not only arbitrary but also racist, because it is targeted against races that are not European.It is the condition May wants in the U.K.
The issue of the attack on the immigrants in the UK is far more different in comparison to the issue against illegal immigrants in the United States. If legal migrants in the UK are subjected to the sort of attack coming from a sudden change in policy, what would one expect for the illegal migrants, who have no paper to live and work in the country? Why would anyone want to break the law and come into any country, live and work without papers, when the danger of such an undertaking is living with the fear of deportation?
Unlike the U.K, the major issue in the U.S is about illegal migration, which the authorities here call undocumented immigration. People in support of undocumented migrants say they should be allowed, because they say the undocumented immigrants do the dirty works, which Americans would not do and that the illegal immigrants are also always ready to receive demeaning wages.
Among these pro-undocumented migrants are top politicians, whose aim, according to them, is to eventually ensure documentation  the undocumented migrants through amnesty programs. The undocumented migrants have become instruments in the hands of top politicians, who use them to win elections, because anyone in the country can vote, since no identification card is required to vote.
Further, the politicians in support of the eventual documentation of undocumented migrants will gain votes from documented migrants, in the belief that the fight for the undocumented migrants is also a fight for the documented, because all have once been undocumented before getting their documents.
On the other hand, there are politicians against encouraging undocumented migrants to flourish, which they say eventual amnesty for undocumented migrants will encourage. They use the need to enforce the law and the need to discourage illegality in their fight against illegal immigration. Of course, no one wants to be identified as an undocumented migrant. This creates room for hiding and not coming out to be identified, to avoid being seen as a law breaker.
If the reason given by a large number of people for allowing undocumented migrants is because they do the dirty works and accept demeaning wages, one would want to say that all migrants should be documented and that lack of documentation by migrants be not allowed, to avoid people being indirectly enslaved. This would mean that every migrant on entering the country should seek documentation to escape modern day slavery.
But there are politicians who encourage and approve illegal migration for their own gains, and not necessarily because they love the migrants. They either use illegal migrants as slaves for jobs others would not do or use them to get votes. They are not in anyway better than politicians, who want migrants to normalize their papers as soon as they enter and avoid being undocumented. It is this reporter's response to a guy, who says a particular political party is for the poor and migrants.
No politician loves the immigrants without conditions.The first condition is for the migrant get his or her papers and live according the law of the land. Failure means living at the mercy of the politicians. But when you are an immigrant in the UK, you know know  that having your papers does not preclude you from discrimination.
Isn' it better to be deported as illegal migrant than be harbored as legal migrant and be made to face the humiliation of working to meet an illegal income threshold, be used to do jobs the citizens would not do or use them to garner votes as some politicians do?
NEWS AND FEATURES
News & Features Around The World