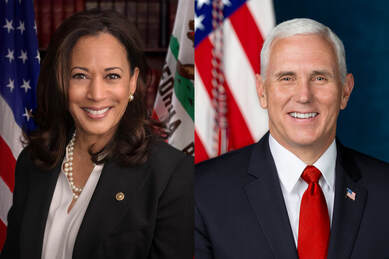 Americans are waiting to see what happens tonight, when Mike Pence and Kamala Harris take on each other, in the only vice-presidential tickets debate between them, for this election period.
Coronavirus has been announced as a major issue on the debate list, and many people await how the two contestants will address the issue, considering that Pence is the man in charge of the nation's fight against  the virus, while Harris represents the opposition against how the government has managed the crisis.
Secondly, Pence's party is struggling in the polls, according to the liberal media poll results which the Republicans and the Conservatives don't trust, while Harris's party is believe (based on the polls_ that her party is ahead. How will tonight's debate affect each party's fortune?
Republican Party enthusiasts say Pence will turn the table, believing he is a better debater, and that he will use his knowledge of the policy issues to improve the party's chances in the November 3 elections.
People who have heard how Harris confronted Joe Biden during their party's primary debate with the latter's alleged association with segregationists are saying that Pence will need to be prepared for surprises, and others are saying Harris is vulnerable as the issue of her accusation of the top of the ticket for association with segregationists may become center of discussion. Many people are optimistic that a question may come up about how Harris feels comfortable interacting with the top of the ticket she has accused of association with segregationists.
Although, Biden has said his alleged close link to the segregationists is one of his efforts at working across the isle to achieve bipartisan efforts. However, many people don't believe him, and that his accusation against Donald Trump who he has called a racist is a case of the kettle calling the pot black. This topic leads to the debate about Biden's 1994 crime bill said to have been responsible for the jailing of many black people, and making his current efforts to favor black people as a way to right the wrong he has committed in the past against them.
Discussions about the Coronavirus will still end up in the case of Biden's Xenophobia accusation against Trump following the president's stoppage of flights from China at the onset of Covid-19. What Pence requires to help his party is to demonstrate the knowledge of his policy. Observers believe that if Pence fails to live up to expectation, Trump will have a lot of work to do in his second debate with Biden to move things forward in his favor for his reelection.
Many people expect questions about the economic situation to be one area the two contestants will be expected to tell Americans how their plans will help Americans and the country. Undoubtedly, capitalism and socialism will be at the center of the table. Tonight's debate will be good to watch.