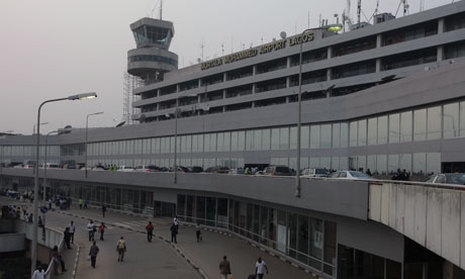 Murtala Muhammed Airport, Lagos, Nigeria
The moment a traveler steps out of the aircraft at the Murtala Muhammed Airport,MMA, in Lagos, it is a welcome to an oasis of discomfort. The air-conditioners are epileptic; heat eclipses the horizon and by the time a traveler walks into the immigration desk, whatever strength that remains is easily depleted for the long period on the queue.
Last Friday, the arrival of some Hajj pilgrims compounded the situation, creating a chaotic scene, which many travelers say would have been avoided has the immigration a back-up plan for the Hajj arrivals aside from the already inundated protocols at the desk.
"The airport is said to be under renovation," a traveler on the immigration queue said. And added, "If the airport is under renovation, should that be an excuse for a leaking roof that makes water to drop from the ceiling?"
Some people say that the situation at the airport is a picture of the entire culture of mismanagement in the country; others say the airport is under renovation and others just don't want to be bothered  about the airport and Nigeria. They say it is how it has always been and a change from that perspective will be a miracle. But many Nigerians say miracles hardly happen in the country, since those in power want to maintain the status-quo.
You approach a young woman in a cubicle to make payment for the wheel to move your luggage since that is the set up there. She says she doesn't accept dollars. When she is reminded that they have always accept dollars in the past and it is why you have a couple of one dollar notes on you, she insists on you leaving your luggage, go outside and change the one dollar to Naira, because the authority has stopped the NAHCO from accepting dollars for the service.
Many Nigerians believe that corruption in the country cuts across board, and that there is no political party or government department that has immunity from it, and that it is corruption that is turning the country's foremost airport, an entry point into the country's commercial capital into seemingly abandoned infrastructure. It is not just the airport, but all other conveniences around it - like car parks and a massive abandoned project in front of the edifice, are crying for attention.
If you think that it is only on arrival that you go through an oven like situation at the airport, you will be shocked that there is no difference to the air-conditioning system at the departure hall on your way out.
One is shocked to read in the newspapers, stories about the aviation minister's office purchase of two BMW cars for N255 million for her own security, and an entire airport that should serve as a public relation work for the country's image is in tatters.
Although the minister had said the cars were not bought for her use; that the testimonies by her subordinates had been muddled and that the cars' purchase followed laid down rules and regulations. But she has not explained whether she is aware or not that the cars' prices have been inflated under her watch.
Aside from the issue of the cars' purchase, many Nigerians are saying the public is entitled to know what is happening to the MMA, because they don't believe renovation should be the cause of the airport's leaking roof, lack of air conditioners among other dysfunctions.