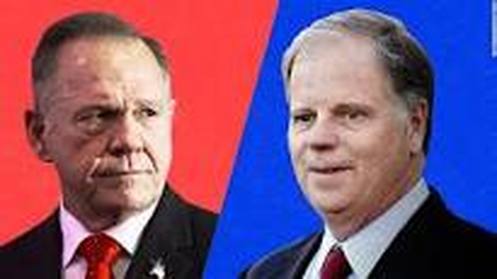 Roy Moore, the looser and Doug Jones, the winner
​    Roy Moore's opponent, Doug Jones, was called winner late Tuesday night, in the special election to fill Jeff Session 's vacated seat in the senate.
​     It was apparent that Moore's accusers had succeeded at truncating Moore's chances in the election and that his opponent, Jones, had benefited as a result.
President Donald Trump immediately congratulated the winner, though he had campaigned feverishly in support of Moore, irrespective of the damage the accusation against the candidate had caused his party..
But Moore declined immediate acceptance of the results and sought a recount. Moore was apparently a loser against his accusers and the immediate beneficiary of the accusation against Moore was his opponent in the election, who would now have to go to the senate, to represent a senatorial district known as traditionally belonging to the Republican Party.
The last time there was an upset against the Republican Party like it happened Tuesday night was 21 years ago, according to media analysis. Given the history of election results in that part of Alabama, it cannot be said with certainty that Moore's loss will be a reflection of the 2018 election  against  the Republican Party.
For example, the New York Post report on its front page on Wednesday described Moore and his horse as losers in the election, opposite of the New York. Daily News that said, "Screw you and horse you rode on", with a rider that said "Teen lusting Moore loses Alabama race in big blow to Trump."
How is a big blow to Trump is not clear here. Is it because of his campaign for Moore and decision to stick to Moore  in spite of the accusations or because the Daily News perceives Moore's loss like some other media news that it is a reflection of future election expectation for the president and his party?
Elections are won and lost. Someone must win and someone must lose. There must be reason for the winner to emerged winner and there must be reason for the loser's loss. The reason for Moore's loss was for the accusation against him that he was fond of sexually molesting young women. And that accusation seemed to have clouded other factors in the campaign.
Moore's maintained their campaign against him just as the election campaign progressed to the wire. It was manifest that that accusation against him for sexual assault played the biggest role in his loss and seemed an assault against his candidacy in the election..
Therefore, Moore's loss could be seen as not a direct rebuke of the Republican Party or the president. The president did what anyone in his shoes could have done, maintained support for his party' s candidate, irrespective of the accusation. Did Trump force Moore on the Republican Party and the party could not withdraw from the race in spite of the accusation? The president's support for Moore was indirectly support for the party.
If the party had decided to ask Moore to withdraw and he insisted on pulling through against the party's directive and the president too stood against the party's directive, one could then say the president' s personality came into play and was bruised as a result.
Rather than thinking that Moore's loss is a reflection of the electorates' view of the Republican Party, and that what has happened to Moore would be expected to repeat itself in the 2018 elections, will mean that all the candidates expected to be filled for election by the Republican Party will be sexual assault accusation victims.
Of course, it would been pretty difficult to have expected Moore to win an election in which the ridicule of an accusation of sexual assault became an albatross round his neck. The lesson for the Republican Party is to avoid fielding a personality with Moore's type of baggage and and who lacks assurance of victory.
Left to Jones without Moore's accusers, he could not have won the election.
Widget is loading comments...
NEWS AND FEATURES
News & Features Around The World