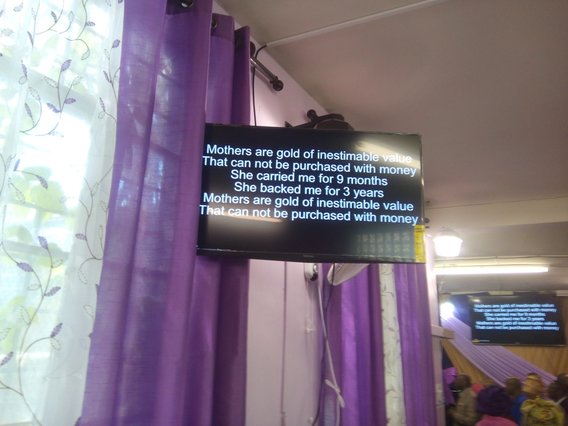 A sign board at the Newark Church last sunday, during the Mother's Day celebration ceremony.
The Brookfield Place in New York that houses the World Financial Center and other organizations, turned into a sort of blooms' field.
Flowers sprouted everywhere, just like every other places in the city and around the globe, in readiness for the weekend's mothers' day celebration.
Coincidentally, the period last weekend coincided with the spring season , a season of blooms. The blooms for the Mothers' Day at the brookfield Place, which are mostly artificial, are still there, yet to be removed around the poles and other strategic places, where the technicians placed them.
The Mothers' Day was not in any way different from the others before this year's celebration. Children showed appreciation to their mothers for the good work of bringing them into the world and nurturing them to become whatever in life and husbands showed appreciation for the mother for the work of assisting in overseeing their children through the easy and hard times of life.
At a Church in Newark in New Jersey, a pastor said in a short sermon marking the day that aside form Adam, every other human on earth have been given birth by women. From Abraham to David and to Jesus Christ. Special prayers of blessings, protection and defense, were offered by men in the Church to women in the Church.
What happened in the Church in Newark was a sample of events in virtually all Churches around the world, accompanied by music and dance and showers of gifts. According to the Church pastor, a day earlier before the day, women had attended a seminar about the need to understand the burden of motherhood and parenthood. He urged members to avail themselves opportunities in the future  to avoid negative trends that destroy families.
All was about motherhood and the family. Where things are well with the mother, the family benefits and vice versa. Therefore, it was important that women, who are the springs of well being of the family, are not allowed to stray and make the family the loser. Many people say it where the negative trends that destroy families have affected the mothers, children are impacted and the story of such children are not for everyone. We only talk about mothers for bringing children into the world.
Every mother interviewed for this piece talked about a weekend of celebration, church activities, dance and lectures. Rosemary Amara, a Sierra Leone American, who works in New York city said that she was with her family during the weekend of Mothers' Day celebration, and that she avoided work, because the family matters to her, more than work.
It is what everyone says that the family is more than just making money and money and tons of money without making the children know we still have love them. There are mony more who were not in Churches or other places for celebration, but were in the confine of their homes, savoring the joy of motherhood, which is all about mother giving attention to bringing up their children, a responsibility that nature has placed in their hands.
Of course, every mother's day, Nico Mbarga resurrects with his song "Sweet Mother", blaring from loud speakers in Churches around the world. in other cases, Choirs make the song a new rendition all over again.
Comment Form is loading comments...
NEWS AND FEATURES
News & Features Around The World