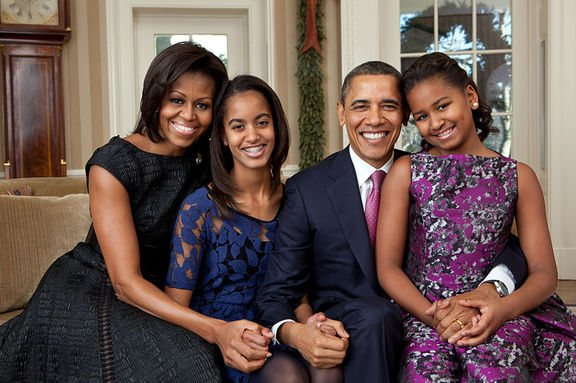 President Barsack Obama and family (Courtesy:TheNation)
No one likes a stranded journey. We all want to arrive at our destination and thank our stars for a conclusive journey, having not fallen victim to any boobytrap, either from the enemies or the evil forces.
A stranded journey may be caused by accidents or chaos that are unforeseen. and may lead to tears and regrets.
President Barack Obama went to Chicago, where he delivered a farewell speech, being where he said he began his political career, worked as a community organizer and got elected as senator and president respectively, aside from starting a family there.
​    One question that escaped many observers was why could not President Obama deliver same speech at the White House, considering the cost of  traveling to Chicago, aside from the cost of the ceremony?
The journey to Chicago had been concluded and the speech delivered. Observers are still very busy discussing the import of the president's speech and the impact it is likely to have on young people.
However, no one seems to be asking question about what has become the crying festival in the last few days, arising from the president's journey out of the White House. Observers not only noted that President Obama became emotional in his speech and that he cried, while he delivered the speech. The news media reported it. Was it a cry of joy or a cry for having missed some moments or for leaving undone what he would have done?
As if the president's cry at his farewell speech in his hometown of Chicago was not enough emotional moment in the president's last days in office, The president without having informed Joseph Biden that he was to be awarded a freedom award, announced to the surprise of the vice president and the news media reported it that Biden broke down in tears, while he was presented the award. Did Biden really broke down in tears or he was tearful?
It was manifest that Biden said he was not worthy of the freedom award and one almost felt that he was about rejecting the award, before he added that he believed that giving him the award came from the president's heart. More surprises may yet come. The nation is just less than ten days away from the change of the baton at the White House, between President Obama and the President Elect Trump.
The Trump's inauguration next week will be marking the end of Obama's eight years in office and the beginning of Trump's first term in office. Based on what political supporters are saying about Obama's time in office, this time should be appropriate for celebrations and not cries and breaking down, for any reason. For as Samuel Johnson wrote in 'Rasellas", "No form of government has been yet discovered, by which cruelty can be wholly prevented."
In essence, it means that no leader, no matter how perfect or how he or she is loved, can claim to satisfy the wishes of all the people. Some people will still not see a president, no matter how high his or her performance, as laudable. The argument about legacy should not even arise, because safe arrival home after a journey and moving forward is all that matters to the people and the country.
Obamacare has opened the discussion for the need for all Americans to have access to healthcare. The program does not need to be perfect or remain untouched without refinement or cancellation, if a better program can be fashioned in the face of rising costs. Trump has also begun struggling with his own political opponents. Let us celebrate.
NEWS AND FEATURES
News & Features Around The World