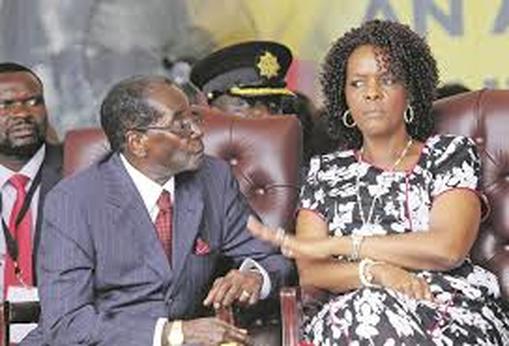 Robert and Grace - love struck duo? (Courtesy: NewZimbabwe.com)
It should ordinarily not be newsworth that President Robert Mugabe loves Grace Mugabe, because Grace is his wife.
But the strange thing here is that Mugabe's love for his wife is so strong, enough for him to vanquish his closest and trusted political ally, in favor of his wife's political aspiration.
This developement makes Zimbabwe a place for newshounds, for reports on where Zimbabwe is heading, resultant of Mugabe's strange love for wife, against his country.
Many observers are saying that Mugabe has not helped Zimbabwe for removing his deputy, Emmerson Mnaangawa, from office.
With Mnangagwa consequently sprinting into exile for the safety of his own life. Virtually every observer of polictal events in Zimbabwe and outside knows how unfortunately fate has delt Mnangagwa with a blow, for having President Mugabe's wife struugling to succeed her husband, and almost effortlessly cancelling Mnangagwa's hope as next Zimbabwe's president.
What many observers had expected was that Mugabe could have used his elderly wisdom to defray his wife's political aspiration in favor of Zimbabwe ensure the political situation in his country does not become a cat and mouse game in his twilight years.
But Mugabe seems to have thrown the elder wisdom into the gutters, based on news emanating from Zimbabwe that he has booted out Mnanagagwa for a week ago and that Mnangagwa has feld from the country and therre has been trading of war of words between Mnangagwa and Mugabe, according to the BBC.
Consequently, news report say the army has warned those the army decribes as responsible for the purging of the country's ruling party, the ZANU-PF. What the army has said is so serious that it says it will not condone the purging of men who has fought for the country, almost like a direct confrontation against Mugabe and Grace.
News report say that the country's General Constantino Chiwenga in appearance with other 90 officer mentions no name of the purgers. But his mention of the purged hides the target of his reference.
"The current purging, which is clearly targeting members of the party with a liberation background, must stop forthwith," he told those gathered for the news conference."We must remind those behind the current treacherous shenanigans that when it comes to matters of protecting our revolution, the military will not hesitate to step in, " Chiwenga was quoted by the BBC.
Many people are saying events in Zimbabwe reflects what happens in most babana republics, where the leader controls everything and his or her words are the authority without challenges. Hoiwever, Mnangagwa's words from outside the country and the country's senoir army officer's seeming intervention may be making a different in Zimbabwe.
Mnangwaga has said that Mugabe cannot take Zimbabwe on the path of turning the country into a personal property to be inherited by his wife. And he seems to have the army generals behind him. And many people whether this is the direction Mugabe is taking the country with all his gragragra about nationalization and driving settlers out with promises of turning the lands back to Zimbabweans.
Some observers are quick to point out that Mugabe may be acting against his own will. They say photos don't lie and they have the photo above as a testimony that Mugabe may have been married to a woman naturally more powerful than him.
HTML Comment Box is loading comments...
NEWS AND FEATURES
News & Features Around The World