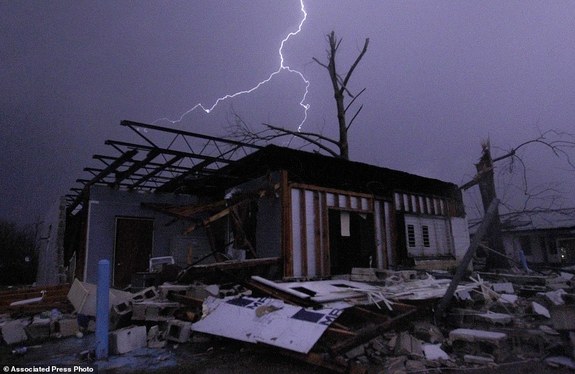 Tornado devastation
"It is cold," many people often say, while wading through the discomfort of winter cold.        People say that almost everyone have fallen into the attitude without knowing it, and that It is the product of weather, which humans have no control, upholding the awesomeness and formidability of the unseen creator of nature.
People have acknowledged that this creator makes it cold, warm and hot, and that situations are in whichever way He wants them, and humans have no option, than manage whatever they have, since they have no power over the seasons.
Imagine the hell that Tornado had reportedly wrecked in some parts of the United States over the weekend and killed over 18 people, who may had been unfortunately be on its path.
Newspapers reports on Monday described the experience in areas hit by Tornado as in a war time.
So, for residents in areas, where the discomfort is about grappling with cold weather would consider themselves fortunate, and that what they have to manage are errors in weather forecasts, the cold, the snowfall and the sudden rainfalls or inconsistency in forecasts.
For example, most weather forecasts on Sunday said that gusty wind would begin on Sunday evening and it would be accompanied by heavy rainfall that is expected to slow down by Monday afternoon. The wind has truly been gusty since Sunday night, but without accompanying rainfall.
Suddenly on Monday afternoon, the rain began ta about 1500hrs, when the thought of rain had disappeared from people's thoughts. Many people believe If humans have their ways with nature, scientists would have responded toward provision of resistance to the attacks from nature and the deadliness they constitute to human lives.
NEWS AND FEATURES
News & Features Around The World