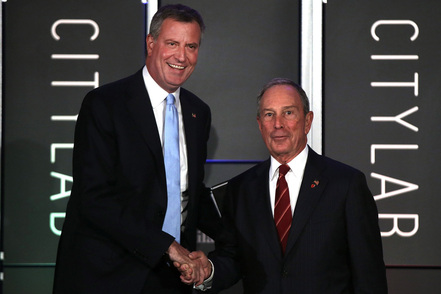 Mayor Blasio and former Mayor BloombergCourtesy:www.nyobserver.com)
A drama is playing out in New York City over the high rise of rent in the last decade during the mayoral years of Michael Bloomberg; Mayor Bill De Blasio's plan for affordable housing and the cry of tenants for a relief from the burden of excessive high rent.
Observers said that the city failed the tenants during Bloomberg's years in the city hall for lack of affordable housing program and allowing annual high rent increases that have shot rent in the city beyond the roof to a crisis level.
Th debate is coming on the heel of last week's rent regulation board's decision on rent increase in the city, when landlords and tenants in the city heard from the City's regulation board that the rent increase allowed in the city for the year is 1 percent on one year leases and 2.7 percent on two year leases.
The rent regulation board's decision came amid protests by tenants seeking rent freeze and landlords seeking rent increase. The drama began about two months ago, when the rent regulation board held its preliminary meeting.
Many New York City tenants who are oblivious how the rent politics is played in the city have expected a freeze. But those who know the politics have said New York has hardly experienced a freeze based on their knowledge of living here.
Thus last week announced rent increase, viewed too low by landlords neither satisfied tenants who had expected that it was possible for the city the have a rent freeze for the first time, in view of the hard economic situation. But just as the tenants are grudging the hard economic situation and that the rent has been going up steadily over the years and almost beyond the reach of tenants, the landlords are complaining about the cost of maintaining building, provision of heating oil in winter and meeting other city obligations like taxes.
Like justifying tenants outcry, the rent increase this is year is described by those who have knowledge of rent increase as lowest in recent times and confirming the board regulation board's attentive ears to tenants' cries. Some reports also said that Mayor Bill de Blasio had given a nod for a rent freeze. However, the mayor and others in the city council those who wanted rent freeze could not command the votes at the board regulation board
meeting. Before the rent regulation board's votes, Edwin Castro, a resident in Far Rockaway area of Brooklyn had said in an interview that there would be no rent freeze based on his experience as a. New Yorker.
"You don't impose your will on people here. It is the market mechanism that decides everything. It is why there has never been rent freeze in the city. I can tell you that the increase may come out to be low, but I rule out complete freeze because it will be unlike New York City."
Castro says surviving in the city is itself  a mechanism residents need to understand. According to him, the nearer you live to the city the higher rent you will pay and the farther you are away to the city the lower your rent will be. But the case today is that everywhere in the city, whether far away from the city or nearer the city, people are crying of heavy rent burden. In most cases, people say after paying rent, you don't have anything and they give a picture of annual rent increase in the last couple of years that have been steep in favor of the landlords. It is a common complain everywhere that the tenants say they work for the landlords.
One week prior to the rent regulation board's decision, the city council members were said to have prepared a speech in favor of rent freeze, but that the deputy mayor in charge of housing had called the council's attention to an increase in landlords' cost in maintaining their homes and that workers in affordable housing questioned the wisdom of freezing rents, but still some of the city council members convinced o the burden the last ten years continuous high increase in rent has imposed on tenant went ahead with statements like "Proposing any rent increase will further endanger our city's affordability and New Yorkers' ability to remain here," and "The safety and security rent stabilized apartments offer has been under persistent threat and these tenants are in need of relief."
Some of the other city council members statement touched on the effect of steep rent as causing homelessness, gentrification and one noted that for the past decade, the rent guideline board has overcompensated the landlords to the detriment of tenants. Many people believe that it is the city's responsibility to create amenable rent for struggling tenants and not the landlords who are also tax payers and expect to be paid  for their houses to be able to maintain the buildings. Tenants argue that these landlords have collected enough rents in the last decade enough to offset whatever income they lose in a freeze.
Comment Form is loading comments...
NEWS AND FEATURES
News & Features Around The World