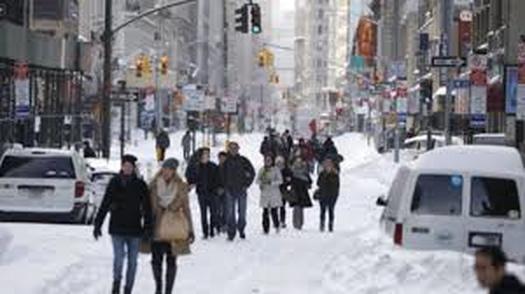 A snowy outlook that currently exists in affected areas of the United States
New York City has not shut down despite accumulation of about  5, 6 and 8 inches of snow between 9:45 pm Friday evening, when it starts snowing and early Saturday morning.
But the snow is still coming down and people say, according to forecasts, the snow will fall all day and into the early part of Sunday, and that the accumulation will be about 18 inches in all, and that it may be less or more, since no one has control over nature.
Washington DC area has shut down since Friday afternoon and so are some other states fearing avalanche of snow about three feet. New Jersey declared a state of emergency late on Friday evening. The Path train running from New York and New Jersey last operation was at 02:00 am on Saturday. By Saturday morning, news report says that New York State has also declared a state of emergency.
Observers say that declaring a state of emergency in uncertain situation when there is a snow storm of this type will avail workers who cannot make it to work to get paid for as long as the state of emergency lasts.
This is a new world unlike yesterday. What is apparent through the window in New York City, looking out while it snows, is a city covered in white flakes of snow. The atmosphere looks serene and the sky still grey. But people at work since Friday evening are still at work. Some have braved their way back home and others are arriving work because the trains are running and some people have managed to drive to work from New York City boroughs and New Jersey.
Hector Colon and Nestor Escalante who said they are on essential services drove drove into the city from Brooklyn and New jersey respectively. Both said that driving in a snow weather required extreme caution and carefulness. Of course driving in a snow weather has been made relatively possible by the timely spraying of snow melting salt on the roads by the authorities.Escalante said that in a normal weather situation, it entails 25 minutes to drive from Jersey city to New York City, but that this morning he does it one hour driving 20 miles per hour.
Nicole Sakozy arrives in the city from Bay Ridge area of Brooklyn on the train. He advised people to remain at work, because according to him, it is not easy navigating the way from the train station to work and from the house to the train station. He explained that what made him to risk coming to work was to make the money. And that is New York's nature, state of emergency or no state of emergency. A female employee of a company in Downtown Manhattan said it took her two hours to get to work, instead of the normal one hour. She described her experience as hell.
St. Hillare made into the city from Flatbush in Brooklyn, and so are others from Queens and the Bronx, showing that the trains are running from all boroughs of New York City. Some New Jersey residents working in the city said that they may have to remain in the city until Sunday afternoon, because they said it would be a miracle to make it home with no buses running in the Garden State. as the day progresses, train service in New York City to have been cancelled on overhead bridges and surface rails, remaining services in  the tunnels in operation.
And Mayor de Blasio has said that the city's decision is based on continuous study of the weather situation, which has led to telling people to get off the street and go home, and that the city may embark on arresting people who disobey the order, because the weather is becoming worse as more snow pours on the ground.
The city says the weather forecast says that the snowfall may end between 09:00 and 10:00 pm, and calculating that three inches of snow will be accumulated every hour, the possibility of shutting down the entire rail service depends on the governor's decision. He said the governor is watching the development and that if the need arises to end the service just as roads between Long Island and New York are being considered for closing, he will not hesitate to decide.
NEWS AND FEATURES
News & Features Around The World