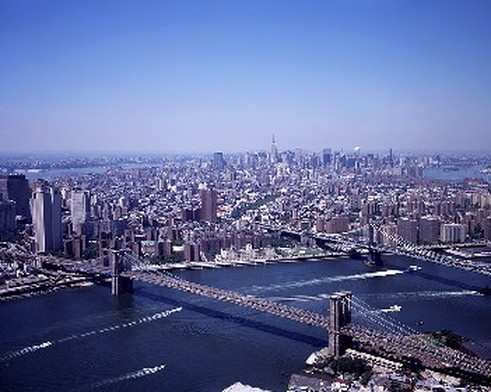 New York City (Courtesy: www.factmonster.com)
The couple are in their in their 50s. They have checked the weather before stepping out of their home. The wife have asked her husband if she needs to dress excessively warm. He has assured her that there is no need for layers upon layers of clothes with the weather at 35 degrees. He assures her that a jacket and under sweater is enough. As soon as they get downstairs and step out, the woman notes that the weather is extremely cold. She asks the husband why he has advised her against dressing properly for the cold.
"I thought it was not so cold. We shall pull through," he assured her. The couple has hardly walked to the train station, when the man realizes he has made a grievous mistake of misadvising the woman. Non-arrival of the train to time allows  the cold to assail the woman and noticeably to the chagrin of the man.
"Can we go upstairs away from the platform to avoid the cold?" he asked
"Where upstairs?" she queried with disgust and disapproval visible on her face.
The man is perplexed that he has caused his wife unforgivable discomfort. Reeling with a sense of regret unknown to the wife, the train arrives. The man thanks his stars. Inside the train, the woman asks to be allowed sit away from the door to avoid the cold blowing her anytime the train stops and the wind blows in. As the train progresses on its journey, the woman falls asleep and awakes when the train stops at their final destination. They sprint to the place of their appointment with the man pacing away in front and the woman follows behind.
"This is a nasty cold," the man said as they waited for the elevator. The woman notices that the man is fidgeting and asks him whether he needs to use the restroom. The man shakes his head in approval.
But the elevator, like the train, is late in arriving and that makes the woman asks the man to find out from the receptionist, if the building has a restroom he might use before the elevator's arrival. The man looks around the reception searchingly and disapprovingly and says the building has no restroom in the lobby and that he will wait to get upstairs to use a restroom.
The man rushes to the restroom and joins his wife for their appointment after he has finished urinating in the restroom.
After their appointment, they make toward the building's entrance. The fear of the cold outside is so strong and adds to the fact that it is their first time in that location, they are unaware what direction to take to the the train station that will take them straight to their neighborhood without changing connections. The man decidedly steps right to the West instead of the East. After walking two blocks, they come upon a train station marked 1,2, and 3.
The woman watches the man. The man looks at her and asks if they can take the 1 train and make a connection at the next stop. The woman is opposed to making any connection. She wants a train that will travel straight to their destination to avoid staying too long in the bitter cold. The man says they would have to walk three blocks back to connect the Q train to satisfy the woman's wish. She agrees and follows him. On their way, the cold becomes more biting than hitherto .
"Why are you so wicked taking me all the way to a station requiring a connection; turning right from the location of our appointment instead of turning left?"
"I am sorry. I turned right to the West, because I thought it was the right turn. I am not wicked. It is the weather. I have heard many people say the same like you have just said that this weather is wicked, and that no matter how long one has lived in this city, one can never get use to it. Another factor people complain about here is that New York is so vast one can never master the whole area, and when one find oneself in an area that one has not navigated before, one has to learn to seek assistance not to be lost before finding one's way back home.
Once in the train, the couple's discussion changed. The weather is temporarily behind them. Their attention has shifted to an advertisement in the train about education.
NEWS AND FEATURES
News & Features Around The World