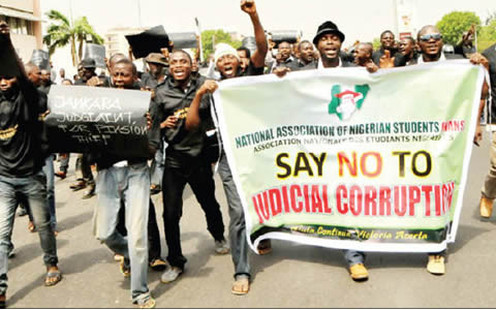 
Nigeria is undergoing a test in the application of the rule of law. The lack of it has been
seen as having caused a sort of Mafia rule in the country and the siphoning of resources
that would have been used for youths and infrastructural development. Observers believe
that the country is still far from achieving the objective to be called a country under the rule
of law and they claim to have reasons for their views.
First, they cite the case of James Ibori, a former governor who the Economic and Financial
Crime Commission, EFCC, could not convict in a court of law in Nigeria but was found guilty
in a London court. And recently a case of bribery that involved Farouk Lawan, chairman of
the House of Representative’s Ad-Hoc Committee for the Monitoring of Fuel Subsidy, and
the secretary, Boniface Emenalo and a businessman named Femi Otedola $620,000.00
remained unresolved. The bribe giver and receivers walking freely as if none of them has
committed a crime.
Ostensibly, the giver who claims his act as a sting operation remains a member of the
country’s inner caucus of the presidency. It was why observers had said the bribe act
was deliberate to get Lawan, whose committee was investigating the oil subsidy scandal,
out of the way. One of the stinger's companies was said to be among the list of companies
under investigation. After the bribery, the company got a reprieve. It is a web of corruption
only a court of law can untangle.
The above synopsis is what frustrated Nigerians who express perplexity over the country’s
ethical existence give as the picture of a country deep in corruption. They are worried that
rather than for the EFCC to work hard for the prosecution and conviction of members of
Mafias whose corrupt lifestyles are the problem in the country, they are saddled with small
time corruption cases that should ordinarily be investigated and prosecuted by the police.
In another development, a Nigerian, Henry Okah, who had been standing trial in a South
African court for several counts of criminal and terroirsm related offences that included the
bombing of Eagles Square in Abuja on the country’s 50th independence anniversary, was
found guilty of 13 counts-including the bombing of Eagles Square in Abuja. The news of
the South African court’s pronouncement of Okah’s guilt was breaking news on 21 January
2013. Simultaneously, Edmund Ebiware, another Nigerian who also had been arraigned in a
Lagos court as Okah’s accomplice in the bombing of the Eagle’s Square was convicted and
sentenced to life jail on 25 January 2013.
Questions observers of events in Nigeria are asking is why the Nigerian court's
pronouncement has to come after the South African court's decision? Why did the EFCC
failed in its prosecution of Ibori, despite years of running in and out of court rooms, and with
Ibori obtaining victory in all the court hearings in the country, before meeting his waterloo in
a London court?
Discerning Nigerians are saying that something sinister is wrong with the country’s judicial
system and that with such a sickly judiciary the culture of corruption that has eroded the
society will not go away. Observers say a country cannot claim to have a free judiciary, where
an appeal court judge suffers removal from office for his ruling against a state governor from
the ruling party in an election case.
More than six months after Lawan’s confession to a bribe of $500,000.00, Emenalo’s
confession to a bribe of $120,000.00 and Otedola’s confession of giving the bribe, the EFCC
has manifestly left the investigation to the police and another arm of the country’s crime
fighting machinery, running after rent agents and others whose crimes have no direct barring
on the country’s endemically corrupt culture, and the use of the rule of law to punish crimes
to make others abhor it, observers say.