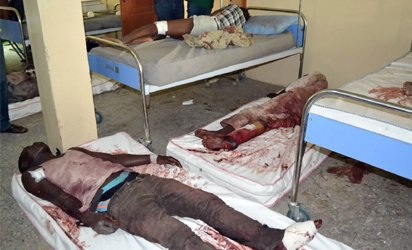 Some victims of Boko Haram attack on Sunday in Maiduguri (Courtesy: Vanguard Newspapers)
Boko Haram killed over 54 people on Sunday in the North East of Nigeria, despite assurances from the Nigerian military that it had decimated Boko Haram. The Nigerian Guardian Newspapers puts the death toll at 117, against government's official figure.
A day later, another news emerged that a Septuagenarian and a former Secretary to the Federal Government, Olu Falae, had been abducted by kidnappers, while he worked in his farm.
In the last four weeks, the incidences of abduction by kidnappers had stemmed up. Two female journalists were abducted and later freed. Another Islamic leader in the north who has been abducted and whereabouts unknown is still in the news.
The gory aspect of these latest abductions is that the kidnappers are asking for N100m ransom from every case of abduction. It is also shocking that Boko Haram was able to carry out three pronged attacks in an area that the government had assured Nigerians it had secured from insurgents.
Shortly before the presidential  election in Nigeria five months ago, the killings by Boko Haram and abductions by kidnappers reached a serious dimension. It was obvious that the level of insecurity in the country caused by the Boko Haram killings, abduction of the Chibok school girls and abductions by kidnappers in the South had taken the rein of power from Goodluck Jonathan. The election was merely a formality to seal his loss of power. Some people still say that it was Boko Haram that gave the opposition the election victory arising from obvious inability of the Jonathan's government to ensure security of lives.
Again, shortly after the elections, the incidences of Boko Haram killings and abductions by kidnappers in the South West and South East slowed down amid uneasy quiet. Although, Boko Haram still intermittently carried out attacks here and there, but not as serious and consistent as they did before the elections. Kidnappers' abductions seemed to have completely seized after the elections. The possibility, in the case of kidnappers in the South for the kidnappers' silence, could have been that they were watching the direction the county was heading.
While Nigerians believed that the military attacks against Boko Haram before the elections and assurances that Boko Haram had been decimated were true, the continued military attacks on Boko Haram's position in the Sambisa Forest by the military after the elections, photographs taken in the forest by the military showing they had decimated Boko Haram, coupled with the the likelihood of the death of Shekau, had given the impression that Boko Haram was in the past. President Muhammed Buhari's regional initiative and his three months deadline to the military to end Boko Haram were all pointers that a new era was here.
Nigerians believed that the new era promised by Buhari had arrived. Amid the uneasy quiet, Buhari began to tell Nigerians about his agenda for the country, different from his electioneering campaign promises. He said there was a need to cancel corruption and give the country a solid foundation.
Meanwhile, the issue of the mass unemployment of youths and other issues requiring urgent attentions of the state had been sidetracked and neglected. The political fight over positions in the National Assembly by ruling party members took the front seat. Nigeria became again like a rudderless ship.
Although, there is a president, but there are no ministers and the president's party supporters are saying the president is an angel; it is the change they have been working, for and that the president's body language alone has begun to make things work in Nigeria. the question is: If the president's body language has been making things to work, why do the country still have kidnappings, abductions and killings by Boko Haram?
NEWS AND FEATURES
News & Features Around The World