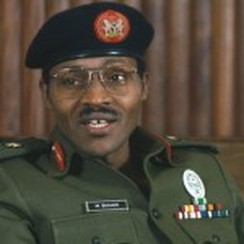 General Muhammed Buhari
General Muhammed Buhari's presidential bid on All People Congress, APC, platform, in Nigeria's February presidential election, has turned into a certificate jam. The controversy surrounding whether or not the former Army General has a high school leaving certificate or not, has become a talk of the town, instead of going away.
"I  attended Provincial Secondary School, Katsina, now Government College, Katsina, and sat the University of Cambridge /WASCE in 1961, the year we graduated alongside Shehu Musa Yar 'Adua, a former chief of staff, Supreme Headquarters and Justice Umaru Abdullahi, a former Appeal Court president. My number is 8280002."
Buhari said on Wednesday.
Buhari spoke for the first time on the certificate controversy, following a disclosure on Tuesday by the Nigerian Army's Director of Public Relations, Brigadier Olajide Olaleye, that the army did not have Buhari's certificates as claimed by Buhari in an affidavit, which he submitted to the Independent Electoral Commission, INEC.
Laleye had earlier said the General Buhari's certificates were with the Army, but that if Buhari wanted the Army to make copies available for his use, he knows the procedure to follow.
Public suspicion grew that it was possible the General may not have certificate with the army since if he had, he would have chosen to retrieve the certificates than face current humiliation. And people felt the Army was helping to cover up for the General.
But following the Army's latest disclosure, which observers say is an attempt to distance itself from a cover up, they say General Muhammed may have no choice than show the public his certificate.
Rather than to immediately cut short his campaign, Buhari  on Tuesday spoke through his media assistant that he would talk about the certificate controversy on Wednesday morning at 0900 am.
Many Nigerians thought they were going to see the General show his certificate to the media, to end the controversy capable of ending his presidential bid. But the General on Wednesday only has words like... the ruling party is after him to stop him form coming to bail out the count try from corruption, unemployment and kidnappings. The next that followed was a statement saying he attended a particular school with a fomer General - now dead, and a former president of an appeal court. He said he had requested the school he attended to make his results available.
What the public is seeking to see is the General's certificate, which he has claimed in affidavit is with the army, and not his result. The Army has said it has a result in the General's Form 199, but there is no certificate to back up the result.
"Record available indicate that Major General Buhari applied to join the military as a Form Six student of the Provincial Secondary School, Katsina on October 18, 1961." Olajide disclosed. The statement said further," His application was duly endorsed by the Principal, who also wrote a report on him and recommended him to be suitable for military commission. it is a practice in the Nigerian Army that before candidates are shortlisted for commissioning into the officers' cadre of the service, the selection board verifies the original copies of credentials that are presented. However, there is no available record to show that this process was followed in the 1960s."
The statement concluded, "Nevertheless, the entry on the NA Form 199 at the point of documentation after commission as officer indicated that the former Head of State obtained the West African School Certificate (WASC) in 1961 with credits in relevant subjects. However, neither the original copy, Certified True Copy, nor statement of result of Major General Muhammed Buhari's WASC result is in his personal file."
Before mid-night on Wednesday, Nigerian newspapers reported Government College, Katsina, on Wednesday issued a statement of result for General General Buhari. However, the question still remains about the General's sense of accountability; not having a copy of his certificate, believing it is with the military and not with the military. Why did he swore in an affidavit that the certificate was with the military?
NEWS AND FEATURES
News & Features Around The World