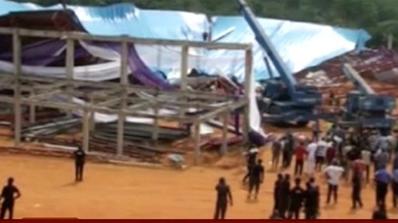 The collapsed Church auditorium as reported by al-Jazeera on Sunday.
About 160 people are feared dead, when the Reigners Bible Church auditorium in Uyo, Akwa Ibom State, Nigeria, collapsed on Sunday, according to news reports.
Although 60 bodies are said to have been recovered, but another reliable source said that the city's mortuaries are reportedly overflowing with bodies.
The BBC reported that one Etete Peters of the University of Uyo Teaching Hospital, confirmed the horrendous number of casualties that toppled government's official number of the dead.
Udom Emmanuel, the Akwa Ibom State Governor, who was reported to be among the worshippers in the Church during the tragedy, but escaped getting killed, and that he had assured the public that thorough investigations would be instituted, to determine the cause of the auditorium collapse.
It is possible that investigations when done will reveal the actaul number of the dead, as either the number of bodies that have reportedly been recovered or the number given by the source at the teaching hospital's morgue.
​   One thing is clear that people don't go to the Chruch and from there go to the morgue enmasse. When all things are down, people seek solace in the Church to live and not die.