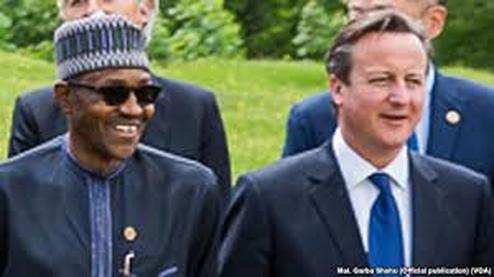 Muhammed Buhari and David Cameron
Are we not all corrupt? Is it not in corruption that we all have been conceived and given birth? Is there any human person who is free of corruption?
These are questions that immediately follow the uproar about David Cameron's description of Afghanistan and Nigeria as 'fantastically corrupt' countries and the effort by some well meaning individuals, who have explained that current Afghanistan and Nigerian leaders are exceptional, as fighters of corruption in their respective countries.
Some people say that Cameron is right in his assessment of Afghanistan and Nigeria, but that the current Nigeria leader is not corrupt. But Cameron did not say Buhari and Nigeria is fantastically corrupt, but that Nigeria and Afghanistan are fantastically corrupt.
What sense does it make to say that only one single person is not corrupt out of about 180 million people? Would it not have made more sense to say that Buhari and his co-travelers in the ruling party are not corrupt and that Nigeria is currently being ruled by a team of non-corrupt leaders? Can a tree make a forest? What difference can a single non-corrupt individual make among a swarm of corrupt people? Perhaps a medal of honor for being non-corrupt, to encourage others to shun corruption.
But many people believe that it is easier said than done to effect a change when corruption or any element of human behavior has become almost akin to a culture. Past leaders and their cronies have stolen the country dry. Billionaires and Millionaires are hailed regardless of their sources of income and the have not treated like they are criminals.The issue of the current fight against corruption in Nigeria, where the fight has turned into an instrument of political vendetta, where on the same day of Cameron's remark, a defense lawyer points out how a defender's asset declaration document has been doctored and the prosecutor says he does not know anything about the doctoring says much about the fantastical level of corruption in the country.
In this same country, the law is applied differently to individuals, depending on the club you belong and the political support for the government. Today in Nigeria, people talk about the fight against corruption, how corruption is fighting back and how deluge number of politicians from the opposition are crossing the carpet to the ruling party and that the only one major ruling member (the senate president) on trial in the country has become a victim of political witch hunt, following his success in the contest for the senate's presidency seat and the loss of the government candidate.
People should ordinarily expect equality before the law in a country that is not fantastically corrupt. But the same judge who had  ruled in favor of one accused person about one year and a half year ago has said in a current case of the same nature before him that difference of application is acceptable. Concerned Nigerians have been crying out against the corruption in the Judiciary without no avail, showing how fantastical nature of corruption in the country
Of course, if Nigeria is not fantastically corrupt, Nigerians would not have been asking for a fight against corruption. And if there are human persons on earth, who are not corrupt, Cameron and Britain would not have fallen under sharp criticism for their own acts of corruption like people who have moles in their own eyes but telling others to remove their own moles. Everywhere, people confront you about the level of corruption in your country and why, and your explanation is that everyone is in a competition to be affluent and be seen as rich, because the government has abandoned everyone and government has become a source of wealth for those in government and their cronies.
It is too early to say that the situation has change all because of a change of people in the government house and with only person ascribing to himself the holiness that is rare to find anywhere.