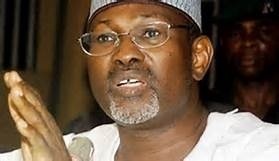 Attahiru Jega
There is a debate in Nigeria over whether or not to remove the head of the independent Electoral Commission, INEC, Attahiru Jega, before the March 28 elections. Members of the ruling party, the People Democratic Party, PDP, are said to be seeking the INEC's chairman removal, while the opposition party members want him retained.
Allegation of Jega's compromise in favor of the opposition, the opposition's allegation that the ruling is plotting certain deals to incapacitate the opposition before the next election are major issues arising in Nigeria's political firmament. People believe both issues can be easily analyzed without allowing partisanship to affect the outcome.
The first question is about the neutrality of Jega who has been accused of compromise by the ruling party in the coming elections. Ordinarily, some Nigerians expect Jega to resign his position over the allegation of compromise against him, while others who are sympathetic to the opposition want him to stay. In the very recent past,there have been news of Jega's removal by President Goodluck Jonathan.
People who follow political development in Nigeria say that though Jonathan has said after the news of Jega's removal that he has no plan to remove him, but there is still a reason to believe that the news may have surfaced based on a belief that government may have finalized a plan to remove him but only waiting to execute the plan.
Ardent observers of Nigeria say Jega's alleged sins of having allowed voters's cards to be delivered completely to some states in the north or local government areas of other states in the country, where the opposition has large followers and making the reverse the case in parts of the country and local government areas where the ruling party has large followers, and alleged meetings Jega had meetings with certain Emirs in the North about the need to ensure that a Northerner is returned as president casts cloud over his neutrality.
And people are asking the reason for the opposition and Northern elders' insistence for Jega's continuity as head of INEC, despite the allegations against him. They say it will be untenable to retain Jega as long as the South of the country does not agree for his continuity.
It does not seem right how a president fighting for survival from former members of his own party will agree to have a man said to have compromised in favor of his political enemies act as an umpire in an election he hopes to win. It is why many people think the  news Jega's removal could have been right and only the execution is delayed.
NEWS AND FEATURES
News & Features Around The World