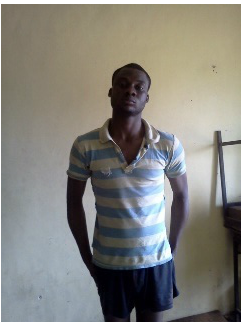 Tolani Ajayi
The body of a murdered lawyer, Charles Ajayi has been recovered in Redemption Christian Church of God camp along Lagos-Ibadan Expressway in Ogun State. According to a Police release, Ajayi was reliably killed by his biological son, Tolani Ajayi, a 300 level history and international relation student at Reedemer University, using a knife and cutlass.
The killing occurred during a prayer session in the family house, when the father resorted to slapping the son, based on the son's statement to the police.
The Police statement said the killing happened on Tuesday 3rd July at 0400hrs, and the body recovered in a nearby bush at Canaan land Street  in the RCCG  Camp concealed in a box. Tolani was said to have been arrested one and a half hour after the killing.
Further, the statement said that the police DPO at the Redemption Camp, SP Olaiya Martins, had led a team of detectives and some members of the community, when Tolani was seeing dumping the box. Following a hunch, they searched and discovered the content of the baggage. They thereafter traced marks of the dragged box to the family's house, where they found Tolani, whom they had just witnessed minutes earlier dumping the box.
"The Police DPO at Redemption Camp, SP Olaiya Martins, had led a team of detectives and some members of the community who noticed the strange attitude of the suspect while was dumping a box to the point where the body of the SAN was dumped and thereafter traced  the ground  marks of the dragged box from where  the suspect  dumped the dad's corpse to the house of the Senior Advocate of Nigeria,where they met the suspect in a relaxed mood  in the house. Upon interrogation, suspect earlier lied that his dad had gone on evangelism before he eventually confessed to the crime when he was taken to the Redemption Camp Divisional Headquarters. He stated further that the problem arose when his late father confronted him for not responding to all the prayer points he(the deceased) was calling and the late father slapped him. He said he went mad and went straight  to the kitchen to pick up a knife to stab him and later a cutlass to cut his throat and killed him."
The police said that exhibits used in the killing include a knife and cutlass recovered by the Police and along with the corpse of the lawyer that had been deposited at a morgue in Sagamu.
Ogun state CP, Ikemefuna Okoye, has directed a team of detectives led by the officer in charge of Homicide section of the Department of Criminal Investigation at Eleweran in Abeokuta to assess the situation and take over the matter for further investigation and necessary action.
The commissioner appealed to parents to always show their children the right path to follow, teaching them right cultural value and morals. He said  it is incredible to hear and see a situation where a son will kill his father in a prayer session.
HTML Comment Box is loading comments...
NEWS AND FEATURES
News & Features Around The World